THE BANGLES ALL OVER THE PLACE - ALBUM 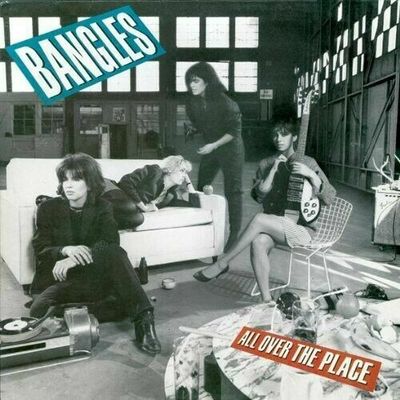 
THE BANGLES
ALL OVER THE PLACE


All Over the Place is the debut studio album by American  band . Released in 1984 through , the sound is lively and shows more Bangles collaboration and fewer keyboard overdubs than were used later on their more commercially successful albums. Although the album was not a major commercial success — peaking at #80 on the Billboard 200 albums chart — and didn't produce a hit, it sold respectably, mostly through steady airplay on college stations. It also gave them the chance to perform as an opening act for  and , and brought the group to the attention of , who would write "", their first hit.

Two singles were released from this album: "Hero Takes a Fall", which peaked outside the UK Top 40, and "", written by  of , which won the Bangles the , the  equivalent of the . The video for "Going Down to Liverpool" features , who plays the part of the band's chauffeur.

The album was reissued in 2008 on the  label (WOU 9220) adding a bonus track: "Hero Takes a Fall" (Single Remix). In 2010, UK label Cherry Pop re-released the album with one bonus track, their cover of  "Where Were You When I Needed You", which was originally released as the b-side to "Hero Takes a Fall.