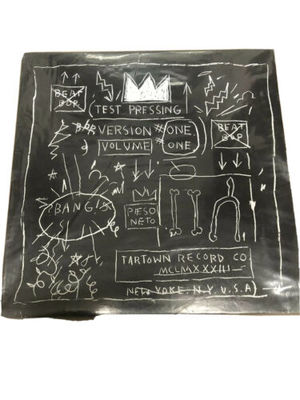 Hip Hop single 12" by Rammellzee and K-Rob, originally released in 1983 by record label Tartown. It was initially distributed merely as a test pressing. Its cover was designed by New York City graffiti artist Jean-Michel Basquiat.

The cover is by NYC artist Jean Michel Basquiat.

The track was initially intended as a battle rap between Rammellzee and Basquiat, following heated arguments between the two. Rammellzee, an influential graffiti artist himself, accused Basquiat of being a fraud. In turn, Basquiat claimed he could out-rap, out-dance, and out-paint anybody. The duo eventually settled on "Beat Bop" acting as an outlet for this tension.

With links to Andy Warhol, Jean-Michel Basquiat was the toast of the New York art world during that period. Rammellzee, on the other hand, describes himself as being an "up-and-coming con artist". Basquiat therefore agreed to pay for recording, pressing and eventual release. Despite this, both Rammellzee and K-Rob had the power to overrule Basquiat on the record's content: "He wanted [to] say his own verses... me and K-Rob read them and started laughing, and we crushed up his paper with the words

he had written down and we threw it back at him face first."

The result was a ten-minute track featuring Rammellzee and K-Rob on vocals, under the direction of Fab Five Freddy, its production credited to Basquiat only (despite Rammellzee insisting that Basquiat did nothing but foot the bill).

Speaking in 2008, Rammellzee reflected on the relaxed nature of the recording session by saying "we were just having fun".

The record was eventually released in 1983, limited to 500 copies with custom art by Basquiat.

Described as one of the artiest and rootsiest record, It has both a great groove and a crazy experimental sound that influenced many artists from Beastie Boys to Cypress Hill.

This is one of the most essential hip hop track, alongside Rapper's Delight and The Message

The LP is in good shape with very slight surface noise, the cover shows some wear in corners and spine.

Shipped worldwide from US.