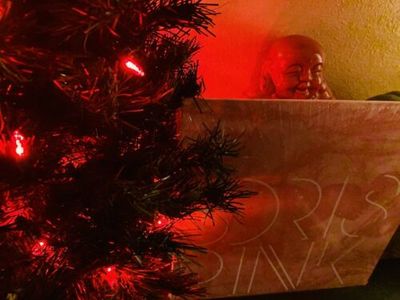 Boris’ 2006 Southern Lord classic, Pink, represents something of a turning point for the avant-metal trio. They’ve upped the speed quotient considerably on this outing, forgoing much of the Melvins-inspired slack of previous efforts in favor of ugly, rapid-fire riffing. Which isn’t to say t’s no doom conjuring or pain-threshold experiments. The band employs the same toolbox of bass, guitar, drums and sundry stomp boxes as before. It’s just that the slow-motion avalanches of yore have been largely replaced by open throttle, throat-tearing thrash. Interestingly, opener “Farewell” takes neither approach. Lush and mesmerizing, the song’s blissed-out guitar and echo-treated vocals give it a grandeur far removed from the band’s noisiest work. The relentless title track hurtles like a derailed bullet train. Subsonic bass scrapes against the unruly percussion like skin on asphalt. By the time guitarist Wata and bassist Takeshi cross riffs in the turbulent outro, the entire band is locked in a death race with itself. “Nothing’s Special” comes close to buckling under its own distorted weight. Impossible to listen to without severe ear burn, the tune contradicts nearly every recording principle known to man. “Blackout” edges closer to familiar Boris territory, delivering the super-colossal savagery the band is semi-famous for. Curdled spoken word bits and volcanic guitar eruptions make for a Zeni-Geva vs. Earth-style showdown. Another track rooted in stoner metal tradition is the giant monster smackdown “Afterburner.” Sluggish and meandering, it probably sounds best lips-to-bong. “My Machine” finds the band drifting through a washed out chordal loop, while “Six Three Times” is coated in malevolent fuzz. Album closer “Just Abandoned My-Self” splits the difference between crust-punk velocity and heavy metal bombast. The tune reaches its climax in a blast of fiery feedback. It seems that Boris is practicing a musical “scorched earth” policy, annihilating the entire record in a kind of sonic holocaust. It’s anybody’s guess what rises from the ashes. + This record is brand new, and unplayed. ++ RARE AF! Make a Boris fan happy for the Holidays! Ships right away from Colorado. Thanks for looking!