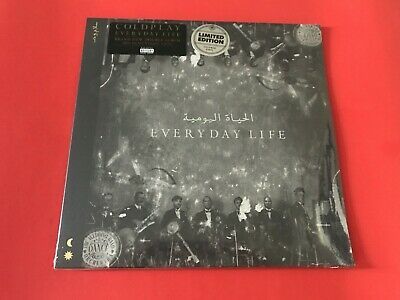 
Coldplay needed a radical change in their musical style and mission accomplished. After producing the same pop ballads & pop dance songs for many years this album is a relief if you care about this group. Of course many disliked it but if there is one group that needed a departure from what they have been offering for almost 2 decades now this is Coldplay. TheGold Colored edition is the most rare by far of all Coldplay editions. MINT condition copy, will ship in bulletproof packaging. Every scan represents the actual copy I am selling. This is a non-smoking home and all records are enjoying my special care. If you need more scans or any other information please ask me.


Everyday Life is the eighth studio album by British rock band Coldplay. It was released on 22 November 2019 by Parlophone in the United Kingdom and Atlantic Records in the United States. It is a double album (released as a single CD), with the first half titled Sunrise and the other Sunset. The release coincided with Coldplay: Everyday Life - Live in Jordan, in which performances of each half of the album were live streamed from Amman, Jordan, at sunrise and sunset, respectively.

The album was recorded from 2018 to mid 2019, with some songs coming from the Viva la Vida recording sessions in 2007–2008. Many returning producers and collaborators joined the band's efforts including "The Dream Team" (Rik Simpson, Dan Green, Bill Rahko), Davide Rossi, and Emily Lazar. Speculation about the album's existence persisted since their previous record, A Head Full of Dreams, as rumours circulated that Coldplay would disband. This is the band's second studio album not to be supported by a major tour, the other being Ghost Stories (2014).

The album received positive reviews from music critics. Most praised its experimental alt rock direction and the shift to politically charged lyrics. Everyday Life was praised for its varied song styles in contrast to their old roots of their previous albums Parachutes to Viva la Vida. Some were less enthusiastic about the execution of the experimental style, citing the album's lack of a thematic consistency. Commercially, Everyday Life earned the band their eighth number-one album on the UK Albums Chart and their seventh top-ten album on the Billboard 200 in the US. It was supported by four singles: "Orphans" / "Arabesque" in October 2019, "Everyday Life" in November, and "Champion of the World" in February 2020.

Many rare items are available and more will be listed in a weekly basis. Please enjoy the store because you will have a show of extremely collectible Steelbooks, or other rare Slipcover editions, Records and occasionally other products.

Add me to your favorite sellers & I will do the best to help you build or add items to your collection.

In the USA shipping varies upon location. I will only ship using USPS but you get to choose the method of shipping: Media Mail, or USPS Priority which is the safest and fastest way to ship. You will be able through the eBay calculator to estimate your exact shipping cost. That’s unless I have a free shipping discount promotion. In case you buy more than 1 item, please request an invoice because E-bay cannot calculate shipping costs in multiple purchases.

I will only ship to the following countries: European Union, England, Canada and South Korea using USPS First Class for packages up to 4 pounds, or USPS Priority if the weight is higher than 4 pounds. I will always ship in a box with bubble packaging. You will be able through the eBay calculator to estimate your exact shipping cost. Again, in case you buy more than 1 item, please request an invoice because E-bay cannot calculate shipping costs in multiple purchases.

Please make the payment within 3 business days or the 4th day, E-bay will take the responsibility directly to contact you for your non-payment bid.

Returns are accepted if the item is new, as it was shipped to the buyer and there will be a full refund in case of wrongfully described or damaged during transit. On all other cases, I reserve the right to deny a return or negotiate the terms. I only sell Brand New Factory sealed & Mint items and I will always provide every single flaw I can detect. No returns are accepted in international transactions.