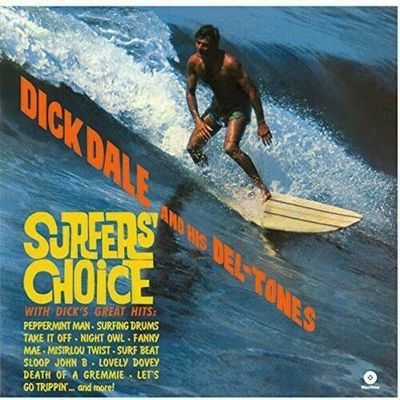 This quintessential collector’s edition presents Dale’s magnificent debut LP,Surfer’s Choice, which was originally issued by the Deltone label in 1962,and has been long unavailable on vinyl until now. It was recorded live at theRendezvous Ballroom in Balboa Beach, California, and is a fifty-fifty splitbetween vocal performances (“Lovey Dovey”, “Peppermint Man”, “Night Owl”,“Sloop John B.”, and “Fanny Mae”) and powerful instrumentals that trulyforged the genre (“Let’s Go Trippin’”, “Take It Off”, “Surfing Drums”, and“Shake ‘N’ Stomp”, among others). It was also one of the first LPs to featurea surfer (Dale himself) on the cover. In addition to the original masterpiece,this WaxTime collector’s LP contains 4 bonus tracks from the same period,consisting of hard-to-find sides (“Jessie Pearl”, “Jungle Fever”) and popularnumbers: “Del-Tone Rock”, and the now-iconic rendition of “Misirlou”.

Recorded at the Rendezvous Ballroom, Balboa Beach, California,between 1961 and 1962.