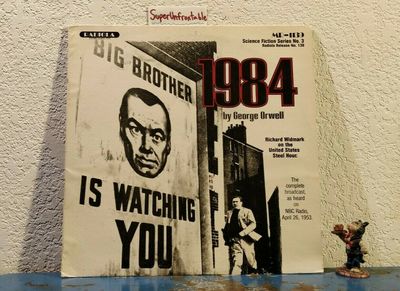 
‎– 1984
US 1983  ‎– MR-1139,  ‎– No. 139
Rare historical item! George tried to warn us about the bleak future western society has created for ourselves. We are well on our way. Do yourself a favor and go ahead and command Alexa to order this album today!
Media is in Very Good+++ condition with some very sparse and light scuffs on both sides. Sleeve is in Very Good+ condition with light ring wear and some dinging occurring at top and bottom of spine. It looks like someone once had this pinned up on a wall as there are pin hole marks at the top of cover which extend to the back cover. Original promotional / Mail newsletter / fan club insert included and in excellent condition (see photo).
Shipped with USPS Media Mail.

Please check out my eBay store for more eclectic records - from a wide variety of genres, including Jazz, Punk, Metal, Hip-hop, Noise & more. . . My whole vinyl collection is up for sale :)

Let me know if you have any questions!
-