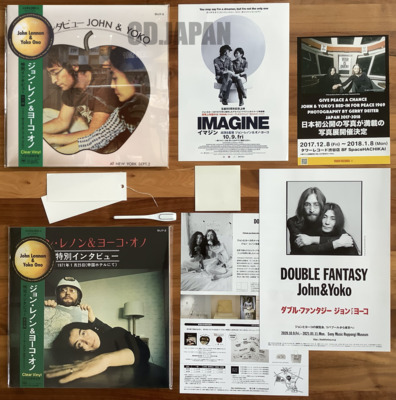 
WARNING: THESE  ARE VERY LIMITED JAPANESE EDITIONS.
THESE VINYLS WILL ONLY BE SOLD AT THE "DOUBLE FANTASY" EXHIBITION VENUE IN TOKYO FOR A VERY LIMITED PERIOD OF TIME.
ORDER YOUR COPY WELL IN ADVANCE TO AVOID DISAPOINTMENT!

NOTE: The vinyls sent will be in mint condiction and factory sealed!

The bond between John, Yoko and Japan.
The successful Double Fantasy exhibition first held in Liverpool comes to Tokyo on the 80th anniversary of John Lennon's birth. Items closely related to Japan are dispayed for the first time  in a newly designed section for the Tokyo exhibition. The super rare "Special Interview", which is only available at the Tokyo exhibition venue, is reprinted in analog form, as a beautiful 10" clear vinyl, for the first time in about half a century.
In the interview, among other themes, they talk about John Lennon's impressive Kabuki impersonation and their special bond with Japan. In addition there are  messages to Japanese fans and stories related to the peace movement that was taking place at that time. It is said that many stories deeply related to Japan such as memories of Japan, haiku, Zen, and Japanese gardens are recorded.

PAYMENT AND SHIPPING:
ORDER CANCELLATIONS NOT ACCEPTED AFTER PAYMENT!

NO VAT, EXCISE OR IMPORT DUTIES WITHIN EU COUNTRIES!


The story of the most creative couple, John Lennon and Yoko Ono,

An epoch-making exhibition traced by their own words, works and valuable exhibits!

From October 9, 2020, the 80th anniversary of John Lennon's birth, at the Roppongi Museum in Tokyo.

In the Tokyo exhibition original exhibition corner, there are also exhibits for the first time in Japan!

“DOUBLE FANTASY – John & Yoko” is a large-scale exhibition held at the Liverpool Museum in England, John's hometown, from May 2018 to November 2019. "For John's hometown Liverpool", Yoko himself was deeply involved in completing the overwhelming content, which was highly evaluated and received a lot of attention. The session was extended by 7 months from the original schedule, and it was an exceptional 700,000. Mobilized people.

The much-talked-about exhibition is coming from John's hometown Liverpool to Yoko's hometown of Tokyo on October 9, 2020, 80 years after John Lennon's birth and 40 years after his life ended!

~ The world's first exhibition filled with words, messages and works of John and Yoko

The world's first groundbreaking experience where you can relive the story of the world's most famous and creative couples, John Lennon and Yoko Ono, through their messages, words, music and art works, and valuable personal belongings. exhibition.

The chronological exhibition is fateful at the London Indica Gallery in 1966, from the birth of two geniuses, Yoko, an artist who leads the avant-garde art world, and the world-famous rock sturgeon. After meeting, he will explore the "IMAGINE PEACE" campaign that continues to this day, over the overall artist activities that have influenced each other.

At the Tokyo exhibition, an original exhibition corner including works that will be released for the first time in Japan will also be decided. There are many items that make you feel the bond with Japan, such as the original sketches of Roman letters and illustrations that John drew to learn Japan, and the peaceful family photos and items in Karuizawa.