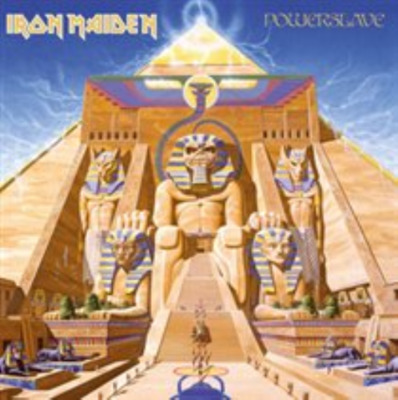 
IRON MAIDEN - Powerslave (180g Remastered Vinyl LP, 2014, Import)
Review from another site: The third in a trilogy of legendary Iron Maiden albums, Powerslave is frequently ranked as the fan favorite of the bunch, capping off a stellar run that sealed the band's genre-defining status. If The Number of the Beast was the all-time metal landmark, Powerslave is perhaps the quintessential Maiden album, capturing all the signature elements of the band's definitive era in one place. The album opens with Maiden at their catchiest, turning in a pair of metal classics right off the bat with the British hit singles "Aces High" (a high-speed ode to a WWII air battle) and the apocalyptic "2 Minutes to Midnight." Next we get an instrumental, "Losfer Words (Big 'Orra)," of the sort that Maiden periodically deployed to keep fans in awe of their technical chops. A pair of their best and most overlooked album tracks follows; "Flash of the Blade" and "The Duellists" exemplify the glory-minded battle hymns that made up such an important part of their lyrical obsessions, even if both are about sword fighting rather than modern military history. By the end of the album, we're seeing Maiden at their most progressive and ambitious. The seven-minute title track builds on the previous album's "To Tame a Land" with its use of Middle Eastern melodies, delving into Egyptian mythology for a rumination on power and mortality. This leads into the biggest, most grandiose epic in the Maiden catalog -- "Rime of the Ancient Mariner," a multi-sectioned, thirteen-and-a-minute prog-fest adapted from the Samuel Taylor Coleridge poem. Though it isn't exactly what you'd call hooky, its shifting moods and lofty intellectual aspirations made it a live favorite. This latter material helped ensure that Powerslave was the Maiden album with the biggest impact on the emerging progressive metal genre (which, in its earliest form, essentially fused Rush with this sort of Maiden material). In this context, "Back in the Village" gets somewhat lost in the shuffle; it's a thematic sequel to "The Prisoner," though not quite as memorable. So even though we don't hear the punk influences of old, Powerslave catalogs every major facet of the band's personality during the Dickinson years, and does so while firing on all cylinders. Perhaps that's in part because Powerslave is the first Maiden album to feature the same lineup as its predecessor, creating a definite continuity and comfort level. Or perhaps it's simply that we're witnessing a great band in its creative prime. Whatever the case, it's entirely arguable that Powerslave summarizes why Iron Maiden was so important and influential even more effectively than The Number of the Beast, at least on a purely musical level. It may not be quite as accessible, but it's every bit as classic and essential. -- Allmusic
FACTORY SEALED, PRISTINE. Satisfaction Guaranteed!
FREE MEDIA MAIL SHIPPING TO DOMESTIC ADDRESSES. International buyers may use eBay's Global Shipping Program.
And see my other RECORDS for sale  and my CDs for sale !