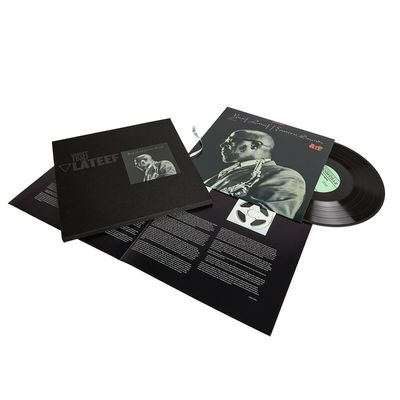 
FREE SHIPPING WITHIN THE U.S.


THIS IS A CONFIRMED PRE-ORDER. THE PRODUCT WILL SHIP WITHIN 1 BUSINESS DAY OF RECEIVING IT MYSELF. SHIPS VIA USPS. EXPECTED SHIPPING DATE: April 23, 2021.

Yusef Lateef’s 1961 classic, Eastern Sounds, is the second release in our Small Batch series — a carefully curated one-step process vinyl collection that is devoted to creating the highest quality reissues of legendary recordings from our vast catalog. Originally released on Moodsville (an imprint of the legendary jazz label, Prestige Records), this pressing of this groundbreaking album will be limited to 1,000 copies.

For this reissue, the original analog tapes were sent to mastering engineer Bernie Grundman, who utilized a custom tube pre-amp and analog mixing console with discrete electronics—both made in-house—as well as a Scully solid-state lathe with custom electronics. Grundman’s lacquers were then sent to Record Technology Incorporated (RTI) for plating using the plant’s one-step process where the lacquers are used to create a “convert” that becomes the record stamper. Utilizing Neotech’s VR900 compound, Eastern Sounds was then pressed on to 180-gram vinyl.

Each pressing is individually numbered and housed in a foil-stamped, linen-wrapped slipcase featuring an acrylic inset of the original artwork. The vinyl disc is housed in a reproduction of the original album jacket, complete with tip-on jacket, and protected by an archival-quality, anti-static, non-scratching inner sleeve. New liner notes from liner notes from GRAMMY®-winning music historian, Ashley Kahn accompanies the title.