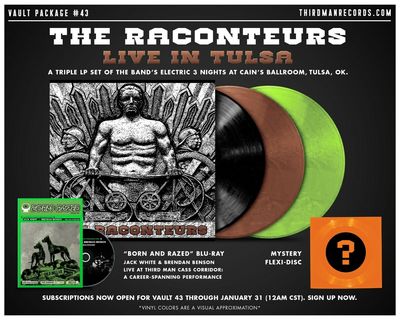 
Offered here for your consideration is a BRAND NEW, THIRD MAN RECORDS "THE RACONTEURS LIVE IN TULSA" VAULT PACKAGE #43 SEALED AND in its ORIGINAL PACKAGING!!!

This is my favorite place to play in the world.”

A more-fitting sentiment we cannot conjure and is the perfect stage banter quote from Jack White to introduce the triple-LP live recording culling the best of the best from the Raconteurs recent three night stand at the legendary Cain’s Ballroom in Tulsa, Oklahoma from October 2019.

As the Raconteurs are allegedly the first band to ever sell out three consecutive shows at Cain’s Ballroom, it was only fitting to mark the occasion by recording each night, culling only the best of each of those performances, and fusing them together for a career-spanning, masterwork of an album.

Highlighting recent entries in their catalog like the infectious “Help Me Stranger” and the whirling “Bored and Razed” while paying deference to momentous sing-alongs like “Carolina Drama” and “Steady, As She Goes” to absolutely mind-bending, room-levitating blues expression via “Blue Veins” and even then you’re only just scratching the surface.

Captured at the pinnacle of the band’s touring behind their chart topping album Help Us Stranger, the electrifying live performances place a raw, unbound energy behind the entire breadth of the band’s catalog, including gems from their 2008 LP Consolers of the Lonely and their 2006 debut Broken Boy Soldiers.

Housed in a magnificent tri-fold jacket and appropriating the Matthew Jacobson-designed artwork which highlights the Art Deco frieze of the Tulsa Fire Alarm building (which was used for the three Cain’s concert posters) and pressed on vibrant copper, green and black colored vinyl…the whole shebang is truly something to behold.

The fitting companion piece to this explosive 3xLP is the intimate performance of Raconteurs’ dual frontmen Brendan Benson and Jack White performing as a duo on July 9th 2019.

Shot at Third Man Records Cass Corridor storefront on White’s 44th birthday, the jam-packed room still only fitting 300 attendees, Brendan and Jack laid out sparse, explorative takes on not only Raconteurs songs, but other classics from their expansive back catalogs. Performances of Raconteurs faves like “Only Child” and “Now That You’re Gone” sound unlike any other version before or since, while the vibe propelling songs like the White Stripes “Sugar Never Tasted So Good” or Benson’s “Metarie” are reminiscent of times back when these two guys would just goof around in Detroit dive bars while a handful of uninterested patrons pretended to not be bothered by their racket.

bout that…as a bonus to the mutli-camera, HD, Blu-Ray, 4k, 16-channel audio with super crystal clear capture of the above-mentioned performance, it felt fitting to tack on the ultra lo-fi, camcorder and condenser microphone capture of the first-ever performance of Jack White and Brendan Benson together. Playing for free at the Garden Bowl Lounge in Detroit on March 14th, 1999, the gig shows the two as if without a care in the world, having a blast and rolling through songs of which only TWO had been released by that point. An intimate, charming artifact of a simpler time.

And for the record, Pink Floyd’s “Fearless” was performed at BOTH of these shows, twenty years apart but no less magnificent.

For something a little bit different, we are offering a MYSTERY Raconteurs flexi-disc as our bonus item in this package. Let the speculation begin!

Consoler of the Lonely

Steady, As She Goes

Only Child (The Raconteurs)

Now That You’re Gone (The Raconteurs)

Shine The Light on Me (The Raconteurs)

As Ugly As I Seem (The White Stripes)

We’re Going to Be Friends (The White Stripes)

Help Me Stranger (The Raconteurs)

Only Child (The Raconteurs)

Now That You’re Gone (The Raconteurs)

Shine The Light on Me (The Raconteurs)

As Ugly As I Seem (The White Stripes)

We’re Going to Be Friends (The White Stripes)

Help Me Stranger (The Raconteurs)

I Fought Piranhas (The White Stripes)

Dead Leaves and the Dirty Ground (The White Stripes)

You’ve Got Her In Your Pocket (The White Stripes)

Do (The White Stripes)

Good to Me (Brendan Benson)

NICE TRY SUCKERS, WE AIN’T FALLING FOR THAT!!!

If you have any questions please feel free to ask.

You Know That You want This!!!

Buy with CONFIDENCE from a LONG-TIME Ebay Member with 100% POSITIVE FEEDBACK!!!

From a SMOKE-FREE home!...This item is priced to sell, so be sure to take advantage of this NO RESERVE Auction and BID TO WIN or BUY IT NOW!!!...Be sure to BID NOW and...MAKE IT YOURS TODAY!!!

Payment is due immediately and is accepted via PayPal only...Shipping insurance is included with the freight charges.

Thank you for visiting Ringside...Please visit my other auction listings for more rare and interesting items, and...may God richly bless you and your family!!!