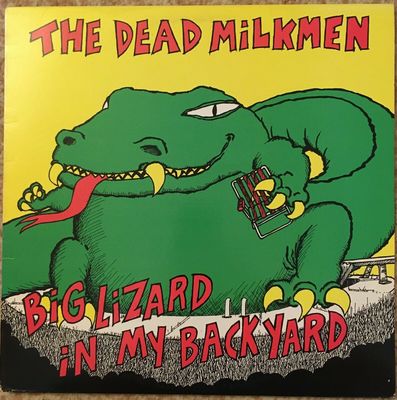 
The Dead Milkmen ‎– Big Lizard In My Backyard

Vinyl is NM with only one very small faint surface mark on side B, no scratches, beautiful glossy shine, clean labels. Sleeve is EX/VG++, clean, intact edges, no splitting, no ring wear, no writing, some very minor corner bumps.

They enjoyed international success on the strength of "Punk Rock Girl", a single from their 1988 Beelzebubba album which entered into MTV rotation. After an ill-fated stint with major record label Hollywood Records, health problems and industry frustrations in the wake of their success led to the group's 1995 breakup.

The group reunited in 2008, with Dan Stevens replacing the deceased Schulthise. In 2011, they released The King in Yellow, their first studio album in 16 years. They remained active thereafter, touring sporadically and releasing further records.