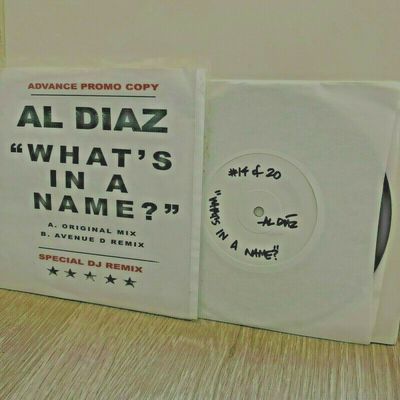 
For your consideration, a truly unique leftfield 80's Post Punk/No Wave DJ DANCE PROMO 7" VINYL 45RPM SINGLE. This scarce White Label PROMO was hand-numbered and signed by the artist. Extremely rare (20 COPIES) from legendary N.Y.C. Street Artist & Musician Al Diaz. UNDERGROUND D.I.Y. NO WAVE FUNK WITH A LATIN GROOVE. Super rare, killer music and truly a missing link within the wheelhouse of N.Y. Post-Punk history. Listen for yourself and decide. Good luck and bid with confidence!
Paypal only. Your item will ship within 48 hours of payment. Powered by eCommercePlayer.com

"It was after the “SAMO” [a tagging collaboration between Diaz and Basquiat that ran from 1977 to 1980], when we’d gone our separate ways, that I had really started to get involved in playing music. I started making my own percussion instruments, kind of vibraphone-type things, but more homemade, with the electrical conduit pipes and aluminum bars. The Lower East Side was really happening back then. I hooked up with my friends Liquid Liquid and played in different bands downtown like Konk, Dog Eat Dog and also with an experimental guy named Elliott Sharp… Not that I’m a gifted percussionist, but I had all these cool-sounding different instruments and I could hold a rhythm."

"The theme for , a documentary film that focuses on graffiti and other areas of , "Beat Bop" is largely typical of early 1980s New York hip hop music. However, the track has experimental touches that have led it to be described as "both hip hop's artiest and its rootsiest record" and "one of the craziest records of all time". Similarly, Internet record store Boomkat praises the record, describing it as "a stunning ten minutes of psychedelic instruments and stunning old school anthem lyrics". Over ten minutes long, with no definite chorus or structure, the track is epic in scope, featuring a driving bassline that underpins the track and a heavy influence from both  and . Various instruments are brought in and out of the mix throughout, the majority of them played by Al Diaz, a friend of Basquiat. These include a violin, an electric guitar, and a varied range of percussion. The vocals are delivered in a relaxed, chaotic and almost  manner, often overlapping themselves, with both rappers occasionally adopting fake voices. A heavy amount of  is applied to the vocals in a seemingly random manner, sometimes during the middle of sentences. The track ends by fading out during the middle of a verse, offering the listener no definite conclusion. Each version of the single has featured the instrumental of the track on the B-side."