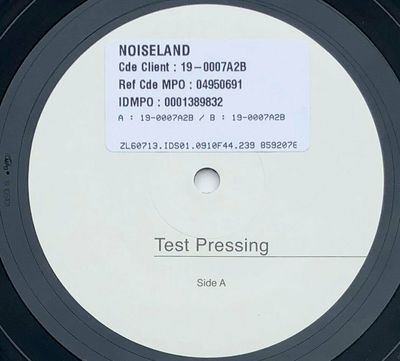 
An ultra rare rejected Columbia Records test pressing of the Bob Dylan 2019 Record Store Day "Original New York Test Pressing" of Blood on the Tracks.  This was pressed at the MPO Records pressing plant in France.   That's right, this is a test pressing of a test pressing of a test pressing, and a rejected one at that!  On Record Store Day 2019 Columbia released, for the first time, a faux test pressing of the original, unreleased original version of Blood on the Tracks [which was only ever pressed as a test pressing, in 1974]. This is an ultra rare test pressing of that Record Store day issue used in the production of the Record Store Day issue.   This has different matrix numbers than the released version, and was probably rejected because of some surface noise during "If You See Her Say Hello." Matrixes: A side, etched [stamped]: 19-0007NL-19075931221 AII MPO 19 105101 [logo & No. stamped] Kr SSTMatrix / /B side, etched [stamped]: 19-0007NL-19075931221 B Kr SST MPO 19 101834 [logo & No. stamped]   In near mint/near mint- condition, with a few light ticks during "Lilly, Rosemary and the Jack of Hearts."  A great Dylan collectible for a fraction of the $10,000. you'd pay for an original 1974 test pressing.
We grade all records visually, cover first, then disc; using the abbreviations M / NM / EX / VG with + and -. We try to describe everything as accurately as possible, and spot check any vinyl flaw that looks like it might make a sound. We regularly receive praise for our grading, but as all grading is subjective, we are happy to give a full refund for anything you aren't happy with no questions asked.

Unlike some eBay sellers, we don't feel the need to hype records by including long reviews or albums, quoting lyrics, making up arcane variations. We just grade accurately, describe any flaw, and sell only high quality rare records in fine condition.

See our other listings for more from this fantastic collection.