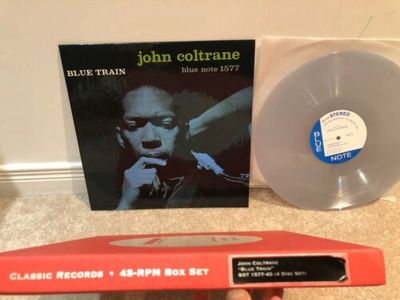 Long Out Of Print.

I've now had the two pressings for about a week and have listened to both six times and have finalized my impressions of both pressings. I did not clean the LPs or use Gruv-Glide so their sonic signature would not be implanted on either pressing, I just used my carbon fiber brush and cleaned the stylus with Zerodust. Now that I have finished my evaluations I will be cleaning them and applying Gruv-Glide on the next play.

These are my impressions of John Coltrane's "Blue Train" the 200 Gram Quiex SV-P versus the 200 Gram Clarity SVP-II LP: On the Clarity pressing the bass is deeper, fuller and clearer. There is more ambiance, better soundstaging, on the Clarity pressing I can clearly hear the location of each instrument. On the Quiex pressing the image was a little smaller and sounded more hard left and hard right. The Clarity pressing sounds more like the feel of a Jazz club. I have no explanation on why not using the carbon black additive could make such a difference and why no one has thought of trying this before.

..."We discovered some ancient semi-automatic presses at Bill Smith Custom Records in El Segundo, California near Los Angeles International Airport (LAX) and worked with the owner Kevin Smith, the late Bill Smith's son, to put the idle presses back into production. We had multiple sets of book dies made using both the groove guard Flat Profile and the non-groove guard Flat Profile and started learning how to make 200g Flat Profile records on machines that undoubtedly made Blue Note LP's in the 1950's."

We found out that among other things, pressings from the semi-automatic presses sounded better than pressings from automatic presses using the exact same stampers and vinyl! How could this be? Kevin Smith explained that the semi-automatic presses employ a Temperature driven cycle and automatic presses generally have a Time driven cycle. He continued that, it has always been known, in record pressing circles I suppose, that semi-automatic presses make consistently better sounding records than automatics because of the reliance on temperature rather than cycle time. When I asked why automatics were deployed over time, Kevin answered simple - "To avoid Monday and Friday pressings" which he explained resulted from operator variability on those two days of the week historically. We had accidentally found another LP production innovation that made pressing more reliable with fewer rejects but resulted in a loss of fidelity in the finished product.

We had found our way back to the mid 50's in terms of pressing quality – imagine that. While I'm at it, you might wonder why, like semi-automatic presses, the flat profile used in early mono records was replaced by the conventional convex profile in common use today. The answer is obvious when viewed in the context of the problems Classic encountered and struggled with until the Super Vinyl Profile II modification – STEREO records! This is another example of the point I have been making for years now that quality from a pressing plants perspective is not exactly aligned with that of listeners generally and audiophiles specifically. Pressing Plants, understandably strive for consistency in pressing with a minimum of rejects so automatic presses and conventional convex pressing die profiles are the norm. Ah, but if you want to make the best sounding records then you must press them using a Flat Profile die on a semi-automatic press which is exactly what Classic Records has been doing almost exclusively since March of 2008! I might note that due purely to a shortage of stock and the need for product did we make a business decision and opt to press a few titles since March of this year on 180g conventional profile at RTI. Let me be clear on this point, while the RTI 180g pressing are very good pressings, and in the absence of 200g pressings to compare would be deemed perfectly acceptable, they are NOT as good as a 200g pressing made at RTI and not nearly as good sounding as a 200g Flat Profile pressing "Hand Made" on the semi-automatic presses at Bill Smith Custom Records (BSCR).

The change we are most excited about is a move toward a new vinyl formula with some unique characteristics. We have named our new formulation Classic CLARITY VINYL and it is exclusive to Classic Records. The genesis of the new formula came as a result of a visit to High End Audio's self proclaimed Vinyl Guru Michael Fremer's Analog Laboratory in suburban New Jersey. After being shown a large number of garage sale "finds" that Mikey picked up for a quarter each, I sat down for a listen and was, as many before me, suitably impressed with the sound presented there. Mr. Fremer, as I like to refer to him in deference to his analog tenacity, then proceeded to demonstrate for me a Furutech LP demagnetizer on the Classic 200g Flat Profile of "Masked and Anonymous" using "Most of The Time" performed by Sophie Zelmani (track two on side 2) which I know very well and is a personal favorite as well as a great demo tune.

We started by playing the cut at a realistic level on his infamous Continuum Turntable and I thought "this is pretty darned good sounding". Without muting or touching anything, Mikey then placed the LP, b-side down, on the demagnetizer and pushed the button that turned on a red light that changed to green after about 30 seconds of silent operation. As he put the LP back on the turntable, I thought to myself, "here we go again with another tweak that will change something that I can hear but can't explain nor determine whether the difference was better or worse". Skeptically predisposed, I listened as the perfectly cued stylus touched the lead in to the song. My mouth dropped open from the first note and remained opened throughout the entirety of the tune! The vocal had so much more texture, bass definition and clarity of every nuance of the recording was vastly improved and there was more low level information than I had ever heard in the recording. I felt like, for a moment, that Sophie was in the room singing to me having suspended my disbelief that this was a recording and having been fooled into believing it was real. I had not heard such a dramatic difference in LP playback since the first time I heard a flat profile Classic LP versus a conventional profile of the same title. In much the same way as with the initial Super Vinyl Profile versus Conventional Profile comparison, I was left puzzled trying to figure out why the demagnetizer had the sonic effects I clearly heard on a piece of plastic.

The answer was to come soon after that fateful day in the "Vinyl Temple" when, at the Consumer Electronic Show, I asked the Vice President of Furutech for an explanation. Through an interpreter, he explained very simply "the carbon black that is ADDED to vinyl for LP manufacture contains trace metals that become randomly magnetized and interfere electrically with the cartridge hanging overhead during play". I shared with him that when I heard the effects of his machine on my LP's that it was quite an "ear opening" experience, which I think he appreciated being told about.

I obtained Furutech demagnetizers for both home and Classic Records and became and remain one of the converted. Then one day, I was out running and I was struck by another epiphany – if carbon black and the trace metals contained therein caused playback distortion in the cartridge then why not take out the carbon black altogether? I sourced samples of clear vinyl and did some tests against our normal Black Kenan 550 compound made in Columbia. Not surprisingly, what I heard was that the clear vinyl sounded like the demagnetized black vinyl in all the same ways – better detail, better bass, more low level ambient detail and generally more clarity throughout. Working with vinyl manufacturers, we experimented with a number of formulas and finally decided upon a formula we now refer to as our CLARITY VINYL formulation that we are proud to announce to the market.

Initially, we are introducing CLARITY VINYL on our single sided 45 RPM releases which have been upgraded to include special packaging in the form of a box for each release in the CLASSIC CLARITY VINYL 45 RPM SERIES – all pressed on our Super Vinyl Profile II. The first two releases will be:

Also, coming soon on CLARITY VINYL will be: