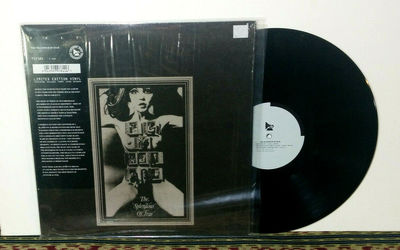 Felt: The Splendour Of Fear

Barcode and Other Identifiers

- BIO - Felt
Profile:
English indie pop band from Water Orton, Warwickshire. Formed by Lawrence who recorded the first single 'Index' on his own label in 1979. The first string of releases through Cherry Red Records featured the playing of classically trained guitarist Maurice Deebank. For some reason despite critical acclaim and a #1 indie single ('Primitive Painters') they never made it big, but have remained a cult band ever since. After Deebank left in 1986 they signed to Creation Records and released Forever Breathes The Lonely Word, arguably one of their highlights and still lauded as one of the decade's best pop albums. They went on to release ten albums in ten years, fulfilling Lawrence's 1980 prophecy.

The Splendour of Fear is the second album by English alternative rock band Felt, released in 1984. It is a largely instrumental album based around long guitar passages inspired by classical guitar music, with only tracks 2 and 5 having any lyrics.

The cover art is taken from the poster for the 1966 Andy Warhol/Paul Morrissey film Chelsea Girls, designed by Alan Aldridge. According to Lawrence, he had discovered the image in a library book without knowing who the artist actually was, having assumed it was Warhol himself. Aldridge never approached the band for using it without his permission. -wikipedia

Have a listen to this great music below !

(STILL SEALED) Sealed at factory and never opened. Disc is assumed to be undamaged and mint, but this cannot be proven until the album is actually opened and the disc examined.
M
(MINT) Perfection, no flaws, defects, marks or otherwise indications of being handled or played. Any scuffs, hairline scratches or other marks disqualify discs from this category.
NM-
(NEAR MINT) The vinyl is virtually flawless, bright and shiny. A very minor, barely visible scuff or two may be permitted, but no scratches. The disc should play with no audible noise. The label is bright, clean and unmarked.

Video will open in a new window
Using the eBay App? Paste link into a browser window: