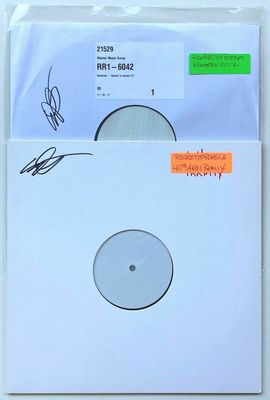 
Two LP test pressings of the Ramones' Rocket to Russia, including the 2017 Remaster and the 40th Anniversary Remix, directly from the archive of legendary Ramones producer/engineer/associate Ed Stasium.   These test pressings were used by Stasium during the production process, and the cover of each disc has been signed by Stasium.  Included are Stasium's signed letters of authenticity for each, noting the history of these discs, reading (for the remaster one):   This letter is to authenticate a test pressing of the Ramones album 'Rocket to Russia' [Remaster 2017] from my personal collection.  During my long associate with the Ramones, I worked on nine of their original albums, as engineer, mixer, producer, additional guitarist and backing vocalist.  I have also engineered, remixed, and produced numerous demos, reissues and live albums for the band.  This test pressing was used during the album's production, and I have signed the sleeve.  Gabba Gabba Hey!  [signed] Ed Stasium.   As noted in Wikipedia, On the first day of sessions, guitarist Johnny Ramone brought a copy of the Sex Pistols' single "God Save the Queen" with him, remarking that their type of music "robbed" the band.  He emphasized that the album's sound engineer Ed Stasium needed to incorporate better production than that of the Sex Pistols, to which Stasium replied "no problem". Johnny relates: "These guys ripped us off and I want to sound better than this."  Though the album cites Tony Bongiovi and Tommy Ramone as the head producers, much of the album's production was done by Stasium; Johnny went so far as to insist that Bongiovi was "not even there" during the band's recording sessions.   Both test pressings are in beautiful Mint condition, and of course, were cut the first discs pressed insuring their exceptional fidelity.
We grade all records visually, cover first, then disc; using the abbreviations M / NM / EX / VG with + and -. We try to describe everything as accurately as possible, and spot check any vinyl flaw that looks like it might make a sound. We regularly receive praise for our grading, but as all grading is subjective, we are happy to give a full refund for anything you aren't happy with no questions asked.

Unlike some eBay sellers, we don't feel the need to hype records by including long reviews or albums, quoting lyrics, making up arcane variations. We just grade accurately, describe any flaw, and sell only high quality rare records in fine condition.

See our other listings for more from this fantastic collection.