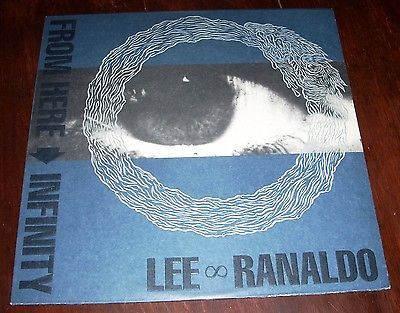 From Here to Infinity (rendered on the cover and label art as From Here → Infinity) is the first solo album by guitarist/songwriter . The album consists of several compositions performed by Ranaldo with guitar, amplifier feedback, and guitar effects recorded onto extended .

The album was originally released by on vinyl, which allowed the listener to listen to the remaining few seconds of each composition for as long as they desired. On the original vinyl recording, Ranaldo created a few of the tracks directly in the studio where the cutting of the original vinyl version took place. In addition to the locked grooves, the LP was mastered at 45 RPM (although the vinyl's record label also gave a "varispeed" designation, suggesting that the record could be enjoyed at any speed) and also contained on the album's second side an engraving of the serpent designed by , which was given its own track number, title, and facetious "" track length.

The spontaneous insertion of recordings during the vinyl cutting stage proved to be both a blessing and a minor setback when it came time for the compact disc edition of the album to be created, according to Ranaldo's sleeve note on the CD edition; Ranaldo utilized a combination of the original master tapes, and recordings taken directly from a vinyl copy of the album to reproduce the tracks that Ranaldo had done in the mastering studio. Ranaldo also extended the length of many of the tracks, and cut new tape loops based on the original recordings "to replace certain lock grooves" that the artist "wasn't altogether happy with" on the original record. The utilization of some transfers from a vinyl copy inspired Ranaldo to boast on the bottom of the sleeve note that the CD edition of From Here to Infinity was "the only compact disc with surface noise".

Each track (except B5) terminates in a locked groove.
Track B5 is actually an engraving of the dragon motif from the cover and its duration is given as "∞".

The dragon motif and typography on the front cover are embossed.

Mastering at Porky's, London. Recordings made in NYC and Nottingham, England 1983-6.