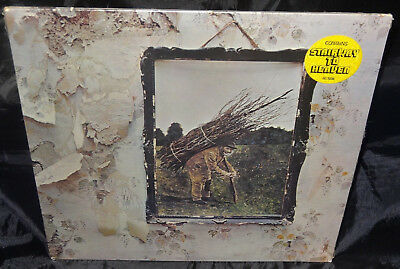 Hype Sticker on the back says

Encompassing heavy metal, folk, pure rock & roll, and blues, Led Zeppelin's untitled fourth album is a monolithic record, defining not only Led Zeppelin but the sound and style of '70s hard rock. Expanding on the breakthroughs of III, Zeppelin fuse their majestic hard rock with a mystical, rural English folk that gives the record an epic scope. Even at its most basic -- the muscular, traditionalist "Rock and Roll" -- the album has a grand sense of drama, which is only deepened by Robert Plant's burgeoning obsession with mythology, religion, and the occult. Plant's mysticism comes to a head on the eerie folk ballad "The Battle of Evermore," a mandolin-driven song with haunting vocals from Sandy Denny, and on the epic "Stairway to Heaven." Of all of Zeppelin's songs, "Stairway to Heaven" is the most famous, and not unjustly. Building from a simple fingerpicked acoustic guitar to a storming torrent of guitar riffs and solos, it encapsulates the entire album in one song. Which, of course, isn't discounting the rest of the album. "Going to California" is the group's best folk song, and the rockers are endlessly inventive, whether it's the complex, multi-layered "Black Dog," the pounding hippie satire "Misty Mountain Hop," or the funky riffs of "Four Sticks." But the closer, "When the Levee Breaks," is the one song truly equal to "Stairway," helping give IV the feeling of an epic. An apocalyptic slice of urban blues, "When the Levee Breaks" is as forceful and frightening as Zeppelin ever got, and its seismic rhythms and layered dynamics illustrate why none of their imitators could ever equal them

GATEFOLD COVER IS STILL SEALED AND COVERED IN ITS ORIGINAL FACTORY SHRINK WRAP W/ SOME CORNER AND SEAM WEAR AND HYPE STICKERS AND SMALL TEARS IN THE WRAP.

No split seams No creases
No cut-out (drill) holes
No cut-out corners
No saw-marks or indents
No dirt/dust rubbing stains (friction marks caused by rubbing against other covers)
No yellowing from aging
No writing
No tape
No water damage
No warping
No wax, glue, paint or liquid drops on the cover
No glue traces or wax residue.