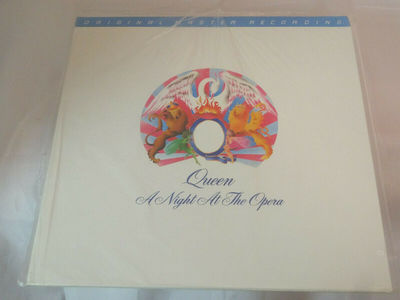 This is for a MFSL LP was pressed in Japan before Mobile Fidelity Sound Labs eventually pressed their Lps in the United States. The LP was Half-Speed Mastered with the Ortofon Cutting System from the Original Stereo Master Tapes. This MFSL LP has a special static free, dust free inner sleeve and heavy-duty protective packaging. This LP has been Out of Print for 38+ years and a bonafide audiophiles collectible.

This Limited Edition FACTORY SEALED LP is an audiophile collectors item that simply gives the feeling of being directly in the studio with the artist. Used nothing but the finest lacquers. The more you play the LP, your stylus will polish the grooves and actually improve the sonics of your MFSL LP. This recording is mastered from the Original Session Tapes. This Out of Print LP has all Liner Notes, Photos, and Artwork from the Original LP faithfully recreated.

A Night at the Opera is the fourth studio album by the British rock band Queen, released on 21 November 1975. Co-produced by Roy Thomas Baker and Queen, it was the most expensive album ever recorded at the time of its release. The album takes its name from the Marx Brothers film A Night at the Opera, which the band watched one night at the studio complex when recording. The album was originally released by EMI Records in the United Kingdom, where it topped the UK Albums Chart for four non-consecutive weeks, and Elektra Records in the United States, where it peaked at No. 4 on the Billboard 200 and became the band's first Platinum selling album in the US. The worldwide sales for the album are over 6 million copies.

A Night at the Opera incorporates a wide range of styles, from ballads and songs in a music hall style, to hard rock tracks and progressive rock influences. It also produced the band's most successful single in the UK, "Bohemian Rhapsody", which became their first UK number one and one of the best-selling singles in both the UK and the world

No stickers No seam splits
No creases
No cut-out (drill) holes
No cut-out corners
No saw-marks or indents
No dirt/dust rubbing stains (friction marks caused by rubbing against other covers)
No yellowing from aging
No writing
No tape
No water damage
No warping
No wax, glue, paint or liquid drops on the cover
No glue traces or wax residue.