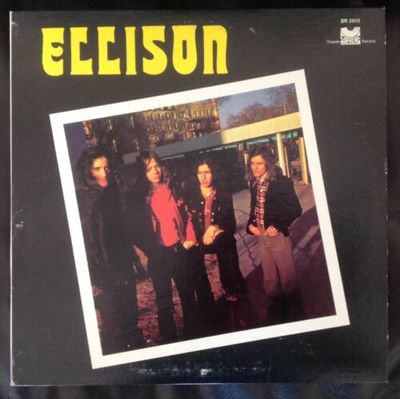 
Ellison's only album from 1971 is a mega rarity as the original pressing.

I accept offers. Solid copy. Cover very close to VG+. Spine is intact, no split. Almost no ringwear. Small writings on back makes it a VG. Record has very few marks, some will cause a light tic, nothing bad or intrusive. Most are hairlines that doesn't affect play. Record is shiny with great luster. Label is clean and intact. Ultra Rare!!!

Ellison was an English Canadian Band from Montreal Quebec. The band was originally formed in 1967 as “Jimmy Peace”, around the talents of vocalist/guitarist Vincent Marandola and bass player Richard Arcand. In 1969, drummer Robert Cager and guitarist Christian Tremblay joined and the name was changed to Ellison.

In 1971 the band released an excellent hard rock styled album on the independent and highly collectable Trans-World label. Mainly selling in the province of Quebec and Ontario, the album had only a limited release and quickly disappeared as did the band itself. The self titled album featured seven original songs that have been described as brash, loud, hard rock with straight from the heart vocal work.

In a similar style as Canadian cohorts The Ugly Ducklings, The Haunted or the Sinners, Ellison has become one of the most sought after Canadian band albums.

I will ship fast and secure.

I have 100% customer satisfaction.