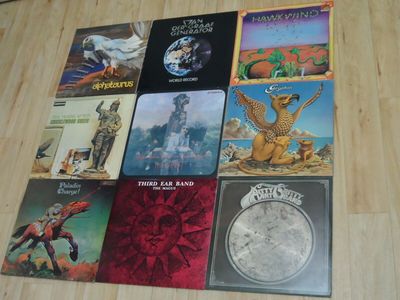 Truly exceptional lot of albums, the ilk of which you never see listed in collections on ebay these days, sadly.

Really exceptional lot from my own collection, crammed with plenty of rare and hard to find prog/psych/rock gems, many of which only turn up only very seldom these days. (This will probably be the last lot of them I put on ebay. It is certainly the best lot I have listed and not easy to part with them). Great opportunity to get hold of a really nice collection that would cost a fortune if purchased separately, not to mention the considerable time and effort taken to accumulate them.

(On the rare Vertigo Swirl pressing. Wonderful album from 1972, inc Borne On The Solar Wind, Lady Of The Lake, etc. On the U.S. pressing, cover is at least Ex on the front, with some ringwear showing on the back of the gatefold. Vinyl is Ex+ apart from one very light stylus mark which does not affect play).

(On the rare Vertigo Swirl pressing. Cover is a very nice Ex+, vinyl VG-/VG visually, due to quite a few light scuff marks, but actually plays through more as Ex. On the Italian pressing)

(On the rare Vertigo Swirl pressing and still includes the rare large poster, as shown in the photo! When I first got this I immediately noticed the big difference in sound quality between this and the later Nems pressing. The Vertigo Swirl copy really does have a much stronger, richer sound than the Nems version. On the German press. Cover is Ex+, vinyl Ex visually with a very nice sheen, but apart from a couple of light clicks in one part, plays through more as Nr.Mint and sounds superb. (Please note - in the photo the lettering on the album looks blue, but that's just the way it appeared in the photograph. It is, in fact, purple)

(Brilliant album with an excellent Roger Dean cover artwork. In my humble opinion, one of the best heavy prog albums to come out of the 1970's, and now increasingly rare, selling for up to £100. Cover is at least Ex/Ex++, a beautiful copy and the vinyl is Ex+)

(Cover is Ex+. There was a small price sticker on it in the the photo, but I have since removed most of it. Vinyl is Ex+)

SIREN - ALL IS FORGIVEN

(Originally recorded in 1972 as a follow up to Macbeth, but never relesed at the time, until many years later, on this pressing. Beautiful Nr.Mint example)

(Increasingly rare psych album. Cover is VG+ due to a single thin line mark across the picture of the aardvark on the front cover.as can be seen in the photo. Vinyl is Ex+)

(Excellent album from 1975 with some real gems of tracks. Cover is Nr.Ex/Ex, vinyl Ex+)

(Their rare & classic 1969 album on the MGM pressing. Cover is Ex+, vinyl Ex+ apart fro one light needle mark which does not affect play)

(Some great tracks on this, featuring Adrian Gurvitz, originally of Gun and Three Man Army, and Cream's Ginger Baker. Cover is Ex/Ex+, vinyl at least Ex+)

MAN - BACK INTO THE FUTURE

(Excellent double album, one of their very best releases with some real gems of tracks. Cover is very clean, but just has some light ringwear appearing, so I have graded it as Nr.Ex. Otherwise would have been Ex/Ex+. Vinyls are a superb Ex++/Nr.Mint)

(Their self titled 1975 release, inc Better The Devil You Know, etc. Cover is VG++, vinyl just about VG)

(1973 album on the Metronome 2001 label. Cover is graded as VG+ due to a mark from a price sticker offer removal. Vinyl is Ex+)

STORMATOPOD - AIR BY THE TON

KING CRIMSON - IN THE COURT OF THE CRIMSON KING

(Beautiful example on Polydor. Cover is Nr.Mint, vinyl is Ex++/Nr.Mint. Not many left in this condition!)

(Nice copy of their 1970 debut album. Cover is at least Ex+, vinyl Ex+ apart fro one light mark which does not affect playback)

(Cover is EX_ apart from a price offer sticker which I have not attmpted to remove. Vinyl is Ex++/Nr.Mint)

(Cover is at least VG+, vinyl at least Ex)

(The rarest of the Greenslade albums. Cover is Ex, vinyl Ex/Ex+)

(Inc Way Behind The Sun, In Time, etc. Cover is at least Ex+, vinyl Nr.Mint)

JETHRO TULL - CREST OF A KNAVE

(Rare and excellent prog album inc Hollow Men, Ixtlan, etc. Cover would be Ex of it were not for some wear on the top of the cover. Vinyl is Ex apart from one needle scuff mark which does not affect play)

MOUNTAIN OF ONE - S/T

(Brilliant and highly sought after album from 1973 on later reissue. Nr.Mint copy)

(Their classic 1970 release. Cover is about Ex, apart from a small name and short address on the back in biro and a name on one side of the record label. Vinyl is Ex++)

SPACE DEBRIS - BEHIND THE GATE

PRELUDE - AFTER THE GOLDRUSH

(Cover is Ex+, vinyl Nr.Ex/Ex, but plays through more as Ex+)

(Cover is VG+ only due to some edgewear, otherwise very nice. Vinyl is Ex+)

(Rare, excellent & highly sought after album from 1972 on Embassy, formed by Peter Banks, one of th original founders of yes and Tony Kaye, the ex Yes keyboaridist. Some real gems of tracks on this and some excellent Hammond organ playing! Laminated cover is Ex, apart from a barely noticeable sellotape on the bottom back of the gatefold that is hard to see, it has been applied so well, and very well disguised against the glossy laminate. Vinyl is VG+)

THE DOORS - WAITING FOR THE SUN

(Still has the lyric sheet insert. Cover is Ex++/Nr.Mint, vinyl at least Ex+)

THE GHOST - WHEN YOU'RE DEAD

(Brilliant 1970 album from a band that hailed from the same part of Birmingham as Black Sabbath. Some real gems of tracks on this. Nr.Mint example on the Mellotron Records reissue)

(Excellent psych/prog album, inc the superb How Can I Live, which was featured on a number of compilation albums. Members included Noel Redding, originally with Jimi Hendrix. Is on a later reissue on the Radiation label. Nr.Mint example of this great album)

(Their brilliant and highly sought after 1973 album. Cover is at least Ex+, vinyl is Ex+ apart from one tiny scuff which does not affect play)

THE SEVENTH WAVE - THINGS TO COME

(Includes the brilliant Painted Chariot, Talking Of The End, Worlds They Rise And Fall, etc. Cover is VG+, vinyl VG)

NEKTAR - DOWN TO EARTH

(Cover is VG++ on the front, but has ringwear on the back. Also has a name written in back ink on the back of the cover.)

THE HIGHER STATE - DARKER BY THE DAY

JIMI HENDRIX - ARE YOU EXPERIENCED

(Classic album with die=cut fold over wallet sleeve at the back. Still has the original UA inner sleeve with photos and reproduction of newspaper article on the band. Cover is Ex+/Ex++, vinyl Ex+)

FRUMPY - IN AND OUT OF STUDIOS

(Their excellent 1974 release inc Sunburst, etc. Cover is Ex apart from a deletion snip. Vinyl is Ex, but plays through as Ex+)

GRATEFUL DEAD -  WAKE OF THE FLOOD  &  FROM THE MARS HOTEL

(Double album containing both LPs on the UA label. Both covers are shown, front and back. Cover is Ex, vinyl is Ex/Ex+ on one and Nr.Ex on the other)

HEADS UP -THE HEADS

(Great album inc Magic Carpet Ride, Reflections, Spiritual Fantasy, Faster Than The Speed Of Life, etc. Cover is Ex+, as is the vinyl)

(Classic, highly sought after psych album from 1967, inc the excellent Empires Of The Sun, etc. An album that was way ahead of its time on a later 1980's repress. Nice Ex+ copy with poster sheet insert)

(Increasingly rare album from 1975. Cover is VG+, vinyl VG+ visually, but plays through as Ex)

(Simply superb album, probably their best release. They were not called the German Deep Purple for nothing! Later pressing on the Zyx label. Cover is Ex/Ex+, vinyl Ex apart from one needle mark which does not affect play)

STALLION - ON THE RUN

(Very nice copy of this increasingly rare album. Cover is Nr.Mint apart from a tiny deletion punch that is barely noticeable, it is that small. vinyl is Ex+)

QUICKSILVER - WHAT ABOUT ME

(Nice copy of this Increasingly rare Quicksilver Messenger Service album. Both gatefold cover and vinyl are at least Ex+/Ex++)

BEGGARS OPERA - GET YOUR DOG OFF ME

(On the Vertigo Spaceship label. Cover is VG+, vinyl Ex+)

BLODWYN PIG - GETTING TO THIS

(Excellent & very highly regarded 1970 album with Mick Abrahams, ex of Jethro Tull. Some great tracks on this and getting quite rare these days. Cover is Nr.Ex apart from a price sticker removal mark, as can be seen in the photo. Vinyl is Ex)

(Brilliant, original sounding prog album from 1971 that was never released at the time, due to the producer turning down a contractual offer from a record company, to try and squeeze more money from the deal, thus blowing the band's big chance of success. Only finally released on vinyl in 2015, copies seldom come up for sale and when they do, sell for up to £50. Great cover art matches the excellence of the album and this is a superb Nr.Mint+ copy)

So there you have it, a real treasure trove of albums, with some wonderful sounds in here!