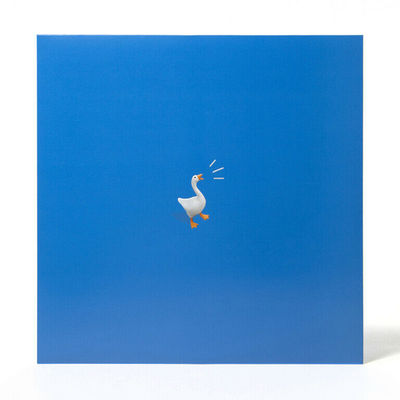 
Special ?Double Groove? Edition Made from Reclaimed Vinyl ?Grind? - Random Color, Because... it?s Recycled! Innovative Eco-Friendly Packaging - 100% Recycled Jacket  Music by Dan Golding, adapted from Claude Debussy?s Préludes Mastered for Vinyl by Townsend Mastering In tandem with production of this record, a donation will be made to the


Claude Debussy is a legendary 20th Century French composer, famous for his ?symphonic sketches?. Over 100 years after penning his masterpiece, Préludes, composer Dan Golding saw an opportunity in adapting Debussy?s whimsical melodic chaos into the soundtrack for Untitled Goose Game. Through meticulous musical surgery, he recorded a few of Debussy?s classics, then broke them into , which afforded developer House House the ability to turn those riffs into a dynamic, reactionary anthem for game?s titular (and feathery) anti-hero.

iam8bit celebrates this one-of-a-kind soundtrack with an equally unique release on wax:

?Double Groove? Randomness. Playing vinyl is typically a linear experience, but we?ve collaborated with masters of the craft to create a ?Double Groove? vinyl. Every time you place the needle, you?re rolling the dice on which path the music will take ?? a lovely complement to the dynamic in-game soundtrack, making every turntable run a random rendition.  Reclaimed Vinyl. The disc is made from salvaged vinyl, which is turned into ?grind,? then remelted and repressed. It?s a process rarely used due to the random nature of its resulting colorways, but we thought it befitting for this title, considering the Goose?s penchant for collecting junk.  Eco-Friendly Packaging. A jacket made from 100% recycled material. Charitable Donation. In tandem with the production of this record, Gotta Groove Records will make a donation to the  to offset energy and transit costs associated with production. We encourage you to check out all the good work the Carbon Fund is doing ? it?s an amazing organization for both individuals and businesses.
Join Gripsweat!