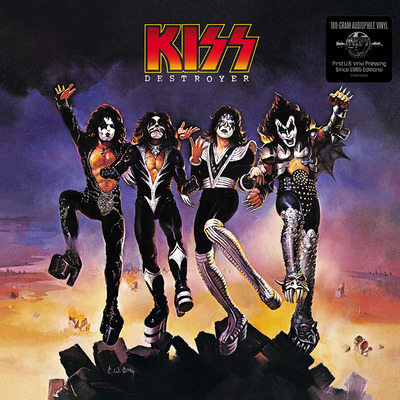 SIDE ONE
1. Detroit Rock City
2. King Of The Night Time World
3. God Of Thunder
4. Great Expectations

Paul Stanley ~ Guitar, Lead Vocals
Gene Simmons ~ Bass, Vocals
Ace Frehley ~ Lead Guitar, Vocals
Peter Criss ~ Drums, Vocals
♪
180g audiophile vinyl LP repressing of the band's 1976 major breakthrough album. Celebrating four decades of decibels, Kiss, Mercury Records and UMe proudly announce reissuing the legendary Kiss albums on 180g audiophile vinyl. Remastered to high definition 192kHz/24-bit audio for maximum fidelity, these albums have never sounded so amazing and now vinyl collectors will get what they've been demanding. All posters, sleeve art, stickers, etc that appeared in the original LP release where applicable have been faithfully reproduced for the Kiss Army.
♫
The pressure was on Kiss for their fifth release, and the band knew it. Their breakthrough, Alive!, was going to be hard to top, so instead of trying to recreate a concert setting in the studio, they went the opposite route. Destroyer is one of Kiss' most experimental studio albums, but also one of their strongest and most interesting. Alice Cooper/Pink Floyd producer Bob Ezrin was on hand, and he strongly encouraged the band to experiment -- there's extensive use of sound effects (the album's untitled closing track), the appearance of a boy's choir ("Great Expectations"), and an orchestra-laden, heartfelt ballad ("Beth"). But there's plenty of Kiss' heavy thunder rock to go around, such as the demonic "God of Thunder" and the sing-along anthems "Flaming Youth," "Shout It Out Loud," "King of the Night Time World," and "Detroit Rock City" (the latter a tale of a doomed concert-goer, complete with violent car-crash sound effects). But it was the aforementioned Peter Criss ballad, "Beth," that made Destroyer such a success; the song was a surprise Top Ten hit (it was originally released as a B-side to "Detroit Rock City"). Also included is a song that Nirvana would later cover ("Do You Love Me?"), as well as an ode to the pleasures of S&M, "Sweet Pain." Destroyer also marked the first time that a comic-book illustration of the band appeared on the cover, confirming that the band was transforming from hard rockers to superheroes.
SHIPPING TO USA ONLY
Buyer Pays Shipping
$4.79 (Media Mail)
1st LP $4.79... each additional $1.50
LPs will only be combined with other LPs
To qualify for the combined  discount,  all items must be purchased together, paid for with 1 payment, and shipped all together in 1 shipment.  Please use the add to cart feature, once you have ordered all your desired items,  proceed to checkout to complete your order with the combined total.