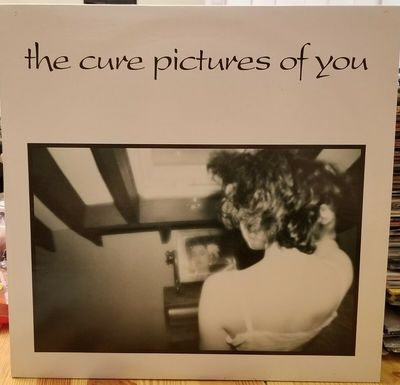 
I've owned this album since 1990 and am ready for it to find a new home with a worthy collector. The record itself is in excellent condition. Opened and played once. The cardboard sleeve has tiny dings and wear along expected areas of seams and corners. Comes with an outer laminated plastic sleeve and original inner paper sleeve for protection. Album has the following songs: Pictures Of You (Extended Remix) Last Dance (Live at Wembley 1989) Fascination Street (Live at Wembley 1989)
***IF YOU WANT TO BUY MORE THAN ONE ALBUM, I WILL SEND YOU A REFUND FOR ANY OVERPAYMENT IN POSTAGE!  PLEASE JUST MESSAGE ME AFTER YOU MAKE YOUR PURHASE.***

MINT (M)
These are absolutely perfect in every way. Often rumored but rarely seen, Mint should never be used as a grade unless more than one person agrees that the record or sleeve truly is in this condition. There is no set percentage of the Near Mint value these can bring; it is best negotiated between buyer and seller.

NEAR MINT (NM OR M-)
A good description of a NM record is "it looks like it just came from a retail store and it was opened for the first time." In other words, it's nearly perfect. Many dealers won't use a grade higher than this, implying (perhaps correctly) that no record or sleeve is ever truly perfect.

NM records are shiny, with no visible defects. Writing, stickers or other markings cannot appear on the label, nor can any ?spindle marks? from someone trying to blindly put the record on the turntable. Major factory defects also must be absent; a record and label obviously pressed off center is not Near Mint. If played, it will do so with no surface noise. (NM records don't have to be "never played"; a record used on an excellent turntable can remain NM after many plays if the disc is properly cared for.)

NM covers are free of creases, ring wear and seam splits of any kind.

A good description of a VG+ record is "except for a couple minor things, this would be Near Mint." Most collectors, especially those who want to play their records, will be happy with a VG+ record, especially if it toward the high end of the grade (sometimes called VG++ or E+).

VG+ records may show some slight signs of wear, including light scuffs or very light scratches that do not affect the listening experience. Slight warps that do not affect the sound are OK. Minor signs of handling are OK, too, such as telltale marks around the center hole, but repeated playing has not misshapen the hole. There may be some very light ring wear or discoloration, but it should be barely noticeable.

VG+ covers should have only minor wear. A VG+ cover might have some very minor seam wear or a split (less than one inch long) at the bottom, the most vulnerable location. Also, a VG+ cover may have some defacing, such as a cut-out marking. Covers with cut-out markings can never be considered Near Mint.

Very Good (VG)
Many of the imperfections found on a VG+ record are more obvious on a VG record. That said, VG records, which usually sell for no more than 25 percent of a NM record, are among the biggest bargains in record collecting, because most of the big money goes for more perfect copies. For many listeners, a VG record or sleeve will be worth the money.

VG records have more obvious flaws than their counterparts in better shape. They lack most of the original gloss found on factory-fresh records. Groove wear is evident on sight, as are light scratches deep enough to feel with a fingernail. When played, a VG record has surface noise, and some scratches may be audible, especially in soft passages and during a song's intro and ending. But the noise will not overpower the music otherwise.

Minor writing, tape or a sticker can detract from the label. Many collectors who have jukeboxes will use VG records in them and not think twice. They remain a fine listening experience, just not the same as if it were in better shape.

VG covers will have many signs of human handling. Ring wear in the middle or along the edges of the cover where the edge of a record would reside, is obvious, though not overwhelming. Some more creases might be visible. Seam splitting will be more obvious; it may appear on all three sides, though it won't be obvious upon looking. Someone might have written or it or stamped a price tag on it, too.

Good does not mean bad! The record still plays through without skipping, so it can serve as filler until something better comes along. But it has significant surface noise and groove wear, and the label is worn, with significant ring wear, heavy writing, or obvious damage caused by someone trying to remove tape or stickers and failing miserably. A Good to VG- cover has ring wear to the point of distraction, has seam splits obvious on sight and may have even heavier writing, such as, for example, huge radio station letters written across the front to deter theft.