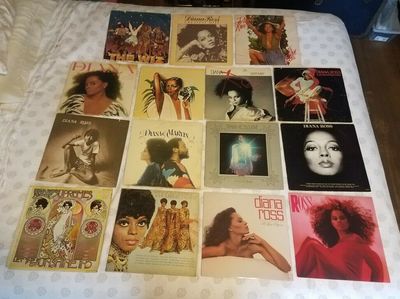 Diana Ross & The Supremes - Cream of The Crop

Diana Ross & The Supremes - Let the Sunshine In

Diana Ross - The Last Time I Saw Him

Diana Ross - Why Do Fools Fall In Love

These records were given to me by my uncle last year before he moved down to Florida to retire. I have kept them and integrated them with my own collection but sadly I am now in the process of moving myself to a smaller apartment and I won't have the space and room to store all the records he gave me along with my own .They have been kept in a smoke and pet free home. Most of these records are in great condition a few may show a bit of their age and have a few scuffs on them but they all play and are all ready to be added to someone's collection and enjoyed for many years to come.