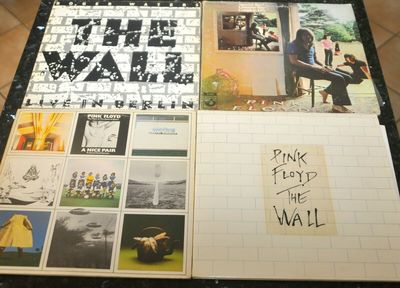 Have now got an Ultrasonic cleaner  and will give another clean before posting, defo improves sound if required

I live quite near to Cambridge, Syd's home town. My brother in law said his girlfriend?s mother was emigrating and had left a bunch of records at his office and asked if I wanted to buy them. They say never judge a book by the cover as I had met the lady whose name was Pauline at a wedding, a blonde sophisticated striking lady so I thought 'possibly'. Cliff Richards or worse still Des O?Connor collection. Brother in law phoned chasing me and said come and look at these records or they are going in the skip as they were cluttering up the place.

Popped over and found 300 or so of the most lovely records you could find, this record, Skip Bifferty, Beatles, Stones, Hendrix, lots of Pink Floyd and an autographed Syd Barrett. Wow.(Yes, I did buy them!)

I spoke to Pauline and it turns out that she was a hippie chick whose boyfriend was in a band called Those Without (Syd's first group). She recollected how she would hump the gear around as a female roadie (probably the light stuff) into a regular venue called 'The Dorothy' and how she and Syd sneaked into one of the colleges to see and meet MC5. Syd was her good friend and they went to loads of house parties where these records got played. She did say some of the records were Syd's and had got muddled up with hers, so I guess a mark on a record is a bit better if made by Syd or his band.

She really knew how to look after her records and would immediately put them into plastic protectors and you can kind of sense which ones were hers and which ones like The Doors which she confirmed was Syd's.

When I asked her about the autographed Barrett, she told me she worked in a record shop called 'Millers', this is the shop Syd was narrowly beaten into second place in a twisting dance competition when he was a youngster and Pauline was there on that day working.

Many years later, Syd was going to autograph his new album for a promo prize for the shop, and when Pauline clocked it she used her womanly charms for Syd to give her the copy which he didn`t mind as he had another one at home, however  he never returned with the other copy, so that left a nice rare copy.

Pauline bought many first issues as she had first pickings of new arrivals and also she was buddies with Andy Gray of Andy?s records where more rare items would surface. (She even kept an original carrier bag with Dark side on)

Pauline's maiden name was 'Blades' and her Dad, Arnold, and their family moved to Peterborough when he became secretary of Peterborough United, home of the Mighty Posh bringing a lovely record collection to our fair city.

I have no authentication as such apart from solid autograph, so I will sell the records at normal prices but most are rare in their own right and its nice to know they have a bit of history.

(See pictures, they have been taken on a high quality Nikon D3 and will zoom in nicely)

Collection is fine, if posted will be very secure, signed for 1st class, tracked fully insured. I use Royal Mail.

Any questions just message me.

No new members buying unless it's cash and collection.

No purchases from South America please as the postage is too unreliable.

Full refund if not delighted

Hi, my name is Stef Malajny. My day job is running the very first UK pizza delivery service, Papa Luigi (est 1983), and my claim to fame is creating the "Buy One Get One Free" promo (Well, I think I did; but it may have been done before 1988, though it wasn't patented). We still have some of our original customers because I believe in looking after them as I would want to be looked after: giving quality and being very fair at all times, and this will be reflected here.