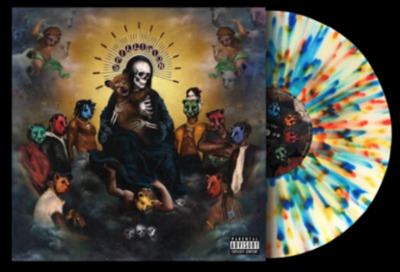 This auction is for an awesome album, it's the hot release from SPILLAGE VILLAGE, it's SPILLIGION!

Pressed on RAINBOW SPLATTER VINYL, this LP is gonna be a gem in your collection!

The group was originally founded by Olu (aka Johnny Venus) and WowGr8 (aka Doctur Dot) of EarthGang, who recruited rapper JID to the group. Brothers Hollywood JB and Jurdan Bryant joined the Spillage Village soon after. Doctur Dot and Johnny Venus approached JID after hearing his first mixtape around campus in 2010. The rest of the group also came into Spillage Village through connections including producer Hollywood JB, who met Doctur Dot at a block party and joined soon afterward. Their first compilation as a collective, Bears Like This, was released independently on February 2, 2014. The album was an exclusive project between the initial five members of Spillage Village, with no features by outside artists. Later in 2014, they announced that singer MEREBA had joined the collective, along with 6LACK and OG MACO.