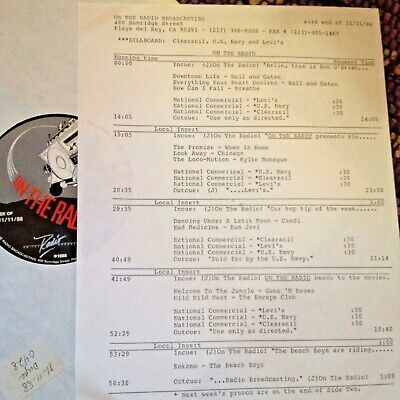 
WELCOME EVERYONE TO KEITH'S KOLLECTABLES, ONE OF EBAY'S PREMIERE BUYERS AND SELLERS OF PRISTINE RARE RADIO SHOWS OF ALL GENRES ALONG WITH OTHER GREAT VINTAGE AMERICANA.

PLEASE  NOTE FELLOW COLLECTOR FRIENDS THAT WHEN YOU BUY FIVE OR MORE ITEMS FROM MY STORE AT ONE TIME THAT EBAY WILL IMMEDIATELY DISCOUNT YOUR INVOICE BY 20%  IT IS THE LEAST I CAN DO FOR MY FELLOW COLLECTORS WHO LOOK FOR GREAT DEALS AS MUCH AS I DO!   THANK YOU!

AND IF YOU ARE A FAN OF THE BEST OF ROCK ALONG WITH GREAT FEATURES AND RARE INTERVIEWS, AND ALL HOSTED BY ONE OF ROCK RADIO'S MOST FAMOUS AND ENTERTAINING DJ'S, READ ON!

EACH RADIO SHOW IS LIKE A DOCUMENTARY SET TO MUSIC,  UNIQUE AND ONE OF A KIND.

SO HERE ARE THE BIG QUESTIONS:

WHAT IS A RADIO SHOW?

WHERE DO THEY COME FROM?

Well, those are good questions, especially if you have never known of them.

First allow me tell you my own personal story of discovering the wonder of radio shows.

I discovered radio shows quite by accident while reading one of my favorite (long since departed) magazines called "Discoveries" (It was later bought by the same company that publishes "Goldmine" which I personally always considered a lesser publication, but that is another story.

This was before ebay became the driving force in radio show sales (and everything else) in the later 1990's.

I was especially attracted in "Discoveries" to a two page (or more) spread in each issue by a guy called "The Old Hippie".

Let me tell you, the Old Hippie had it all.  He was a real pioneer.  Way before anyone knew what radio shows even were let alone that they could be bought as rarities, he had the market cornered.

Most shows that he advertised were way beyond my budget but I drooled over those pages every issue and once in awhile I could afford one or two.

Now, I have attempted in my own humble way to take on the mantle of "The Old Hippie".  I have listed over 10,000 unique radio shows of all genres for you all to drool over, and most at prices, hopefully, that collectors can better afford!  I want to make available to collectors what I could not afford and especially in these days of higher prices and lesser availability.

Radio shows are harder and harder to find in quantity and the prices for the ones still out there just go higher and higher as they disappear from the market.  However, because of my large presence on eBay, I am always being contacted with selling offers, some of which I take advantage of and some I have to pass on because of the prices. I have found that by buying in bulk, even when many or most of the shows are lesser known but still amazing shows, I can offer the best prices on all titles.

So, again, what is a radio show?

Radio Shows are syndicated productions by one of several large and small distributors who supply broadcast product to radio stations normally during weekends when the usual air personalities have a break.  Many air on Saturday or Sunday evenings or during overnight segments.  They often feature some of the best known voices for their genre from across the country thus the Dick Clark's and Casey Kasem's and Rick Dees and Dick Bartley and so many others.

People collect them for various reasons.

Some just collect the series because they like it and want them all.

Some collect interviews with their favorite artists as most shows had interview segments.

Some collect commercials especially old car commercials but certainly not limited to only those.

AND, these shows are in limited quantity.

They were pressed just for syndicated stations in the United States.

Many have just a few still in circulation.

Some of the more popular shows may have as many as a few hundred of each week's show that survived but think about it.  A few hundred for some 200 million Americans and millions of overseas collectors who look for unique presentations of their favorite artists or form of music is about as rare as rare can be.

Also, many if not most stations tossed them away after airing since the shows could not be aired again due to the time oriented commercial content

So there may be fairly few left.

Which makes them increasingly hard to find.

They were first distributed on reel to reel tape if the show goes back that far into the 60's, then later on lp, later on CD and even later  on CDR.

Now they are not available at all to collectors since they are distributed by digital download much like you get your music from iTunes. These shows become rarer and rarer every day because the people who buy them hold on to them and the people who sell them, like me, are running out of them.

The shows that you get now and hold on to will never decrease in value and only increase.

I have prided myself since the start to provide the best and fairest cost with a no holds barred guarantee that you will be happy or I refund your money.  I sell them for near what I bought them for.  I give volume discounts and discount postage always.  As the postal service increases their rates, my shipping rates over the years has decreased.

And, I have one of the biggest radio show libraries in the world consisting of over ten thousand shows, so many that I don't even know all that I have and am sometimes amazed when I go to look for one show and find another that I did not realize I had.

Finally, it is Americana at its best.

Whether the show be from the 60's or 2000's, rock, countdown, oldies, country, classical, religious, jazz or big band, it is unique and home grown.

And you just can't find them anywhere.  Even record stores that still exist will rarely have any.

Radio shows are wonderful representations of the real golden age of radio at least music wise.

And every  one you buy is  an original, not a copy, not a remake - all are limited editions in the hundreds at most and most much less.  Once you get hooked, like me, it is a love affair for life!  Welcome to the Club!

Here is another great show for you from  the ONE OF THE BEST weekly ROCK SHOWS OF ALL TIME,  ON THE RADIO.  AND ON BEAUTIFUL VIRGIN VINYL FROM 31 YEARS AGO.

THIS IS A NEW OFFERING TO YOU AND IS ONE OF THE OVERALL RAREST AND MOST SOUGHT AFTER SERIES EVER SYNDICATED TO RADIO.

I will be listing my special collection of these shows over the next few days so make sure to keep looking for them.  These are my only remaining shows of the series and I don't think I will probably be able to get more.

Quality radio shows are getting harder and harder to come across now that they are all transmitted to stations digitally and not on CD.

What is out there now is all there is and most collectors are holding on to theirs as they grow in value and who would want to give up one of these shows anyway?  If you like classic rock song after song, this is the show for you.  The energy is over the top and the show goes by in an instant.

The show airs on the ON THE RADIO  BROADCASTING COMPANY  and aired  weekly for one hour.

It was hosted by legendary dj, Big Ron O'Brian

O'Brien grew up in Des Moines, IA, and worked at the high school station. He started his professional career in 1969 at KUDL in Kansas City. During the ensuing years,he worked for many stations, including KTLK in Denver, WCAR in Detroit, WQXI in Atlanta, WCFL  in Chicago, WOXY in Milwaukee, WFIL in Philadelphia, KFI AND KIIS in Los Angeles, KWK in St. Louis (where he stayed for nine years), WNBC  in New York, WPGC in Washington, D.C., and WRKO in Boston. WOGL, also in Philadelphia, was his employer for the final six years of his life, and he had recently signed a two-year contract extension.

Big Ron had been the host of the syndicated radio program "On the Radio" from 1985 until 1992.

O'Brien also enjoyed singing. He recorded cover versions of "Everybody Knows Matilda" (D. Baxter) and "Take Some Time Out" (T. Kemp and R. Gordy), both of which were released on 45.

In addition to music and radio, Big Ron loved trolley cars and baseball.

O'Brien died of complications from pneumonia after a two-month illness.

It comes on one LP in new condition looking like it never was played.

This is the genuine original show that was sent to the radio station for airing.  It is NOT an unauthorized copy but the Real McCoy!!!

I personally guarantee that every radio show that I sell is the original show sent to stations.

Stations could use the show anytime during that weekend  and then it ended up available to us all to enjoy.  This show and all the shows in the ON THE RADIO SERIES is ultra rare.  In fact, when they are on eBay at all, they tend to get bought quickly.

You are truly buying a  show that will only increase in value and I am selling them at a price very close to what I paid for it.

Remember that this and all the radio music shows that you see on ebay  are not just about the music although these concert presentations are very rare and often cannot be found anywhere.  It is the mixture of great music and great announcing that makes it so entertaining.

As well, it is a piece of radio and music  history.

MOST SELLERS PUT THESE SHOWS UP AS AN AUCTION AND WAIT FOR BIDDING WARS.  MY SHOWS ARE ALWAYS A BUY IT NOW AT A REASONABLE PRICE SO YOU DON'T HAVE TO PAY MORE THAN YOU NEED TO TO GET THE SHOW THAT YOU WANT. SOME OF THESE SHOWS GO FOR UNBELIEVABLE PRICES AT AUCTION.   I WILL NEVER TAKE ADVANTAGE OF A FELLOW COLLECTOR.   I COLLECT TOO AND LIKE TO GET A REASONABLE DEAL.  THAT'S WHY I OFFER THE SAME TO YOU.

It is a great show and would be a valuable addition to your collection.

As always, for U.S. and international collectors, I charge only shipping on the first show you buy so the more you buy the more money you will save.  (International buyers purchasing multi set shows pay only an additional $8 a show)

Good Luck and God Bless You.