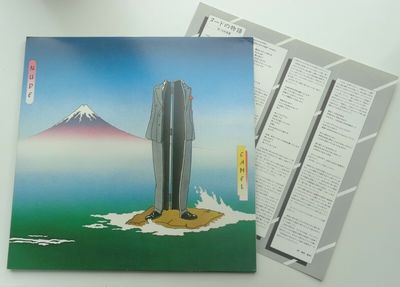 $4.00 flat rate for unlimited items within the US (USPS Media Mail)

GRADING or how the Kraut grades:

Imagine a dark dungeon, flickering candlelight and Slayer blasting in the background. Just kidding (well, probably not about the Slayer Part). I'm only grading VISUALLY under bright artificial white Light since there are simply too many records to listen to.

SEALED : brand new from the Manufacturer. If you want me to carefully open the record to send it separate from the sleeve and innersleeve to avoid seam splits, please let me know when you pay the item.

NEW/UNPLAYED : Also a brand new Record that was never played. It's not sealed though because it never was or I opened it to check the vinyl colour.

EX : I only use this when I bought a record and it looks new but I can't be sure if it was played or not. I guess other Sellers would grade these as NM or even M.

VG++ : The Majority of my used Vinyl is graded vg++. I can't see any problems with these Records but I KNOW that I played them, so that's why I use vg++. Nice shiny Vinyl, no scratches, simply a very nice well taken care of used record. Worst case might be some hairlines from removing the vinyl from the innersleeve or handling but nothing major that could affect the sound of the record.

VG+ : I like to call these pre loved Vinyl. You can tell these records were played a lot and that's why you can expect to find hairlines, light surface scratches, scuffs etc. Nothing that will make the needle jump but you might hear some crackling or other background noises.

VG: These show quite some wear and tear. Very obviously played a lot but nothing that should make the record skip. But you will definitely have crackling and other background noises when you play this record.

G / F : Not in my shop. These went straight to the Dumpster.

I don't grade Picture Discs for a simple Reason: Unless they are not new I bought them because they look cool and they are nice collectables. I NEVER played a Picture Disc and I find it hard to grade these visually so I don't.  So if you want to play your Picture Disc you should definitely go for the ones that are graded as SEALED or NEW / UNPLAYED.

I always leave positive feedback for you as soon as I ship your order. It's just fair  because you honored your part of the deal by paying. I know, as a Collector, that collecting Vinyl is a very emotional thing. You find something and now you're waiting for the postman so you can put your new treasure in your collection.  That's why the last thing on my mind is disappointing you. Keep in mind, that I'm not some hired guy in a big corporation that ships records to get his paycheck. I'm parting, especially when it comes to used vinyl, with some prized possessions out of my private Collection which I hunted for as you do now.

So if you receive your order and there is something you don't like PLEASE don't hesitate to contact me. Mistakes happen and never on purpose. I promise I'm doing everything I can to make it right. Leaving negative Feedback helps nobody (although I heard about some weirdos that actually feel better when they can leave negative feedback instead of contacting the seller and give them a chance to make it right.)