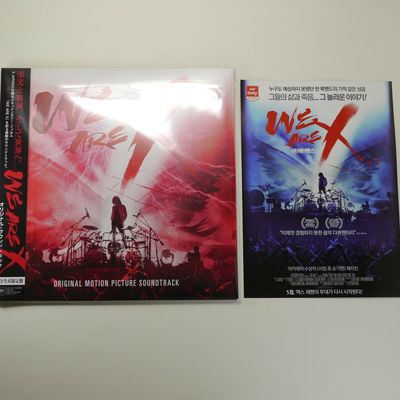 The We Are X soundtrack album became the first film soundtrack to reach the Top 3 on the Japanese charts in over 45 years (last achieved by The Beatles' Let It Be). Furthermore, it also accomplished the unprecedented feat of ranking No.1 on the British rock album charts. The soundtrack became a worldwide hit alongside the film, and the decision was made to release a vinyl version worldwide. We Are X is the first vinyl album to be released from X JAPAN in 20 years, and the first vinyl record to be released on their old label Sony Music in 28 years (the previous time was with their major debut album BLUE BLOOD, released in 1989).

The deluxe exclusive Japanese original version features a red record jacket, double-sided collector's item poster, 4-page booklet, 1 Japanese bonus track, a double jacket, and separately colored double albums (LP 1 is red, while LP 2 is blue). The limited Japanese vinyl edition of We Are X will be released in a limited run of 5,000 copies.

2. Kurenai (from The Last Live)

4. A Piano String in Es Dur

12. Endless Rain (from The Last Live)

We only accept payment with PAYPAL.

If there is flaw on item, we accept returns following our return policy.

Other returns due to personal reasons such as changing colors or mis-ordering or used items or if new products opened package we DO NOT accept returns.

So please purchase when you are SURE.

*Tracking numbers are provided, but sometimes it is not possible to tracking.

*We are not responsible for local custom declaration and tax.