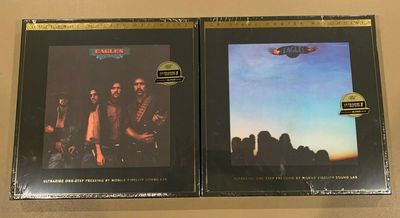 Strictly limited to 7,500 numbered copies, pressed on dead-quiet MoFi SuperVinyl at RTI, and mastered from the original analog master tapes, Mobile Fidelity's ultra-hi-fi UltraDisc One-Step 180g 45RPM 2LP collector's edition pays tribute to the record's merit and enhances the intimate program for generations to come. Playing with reference-setting sonics that elevate an effort forever been prized by audiophiles, this spectacular version provides a clear, clean, transparent, balanced, and intimate view of an album that permanently made California-style rock a style of its own.

The premium packaging and gorgeous presentation of the UD1S Eagles pressing befit its extremely select status. Housed in a deluxe box, it features special foil-stamped jackets and faithful-to-the-original graphics that illuminate the splendor of the recording. Aurally and visually, this UD1S reissue exists as a curatorial artifact meant to be preserved, touched, and examined. It is made specifically for discerning listeners that prize sound quality and production, and who desire to fully immerse themselves in the art – and everything involved with the album, from the iconic photos to the meticulous finishes.

Speaking of the imagery, the front cover brilliantly captures the fundamentals of the Eagles' aural essence. Photographed at Joshua Tree National Park, it portrays a seemingly endless blue sky arched over the hovering copper glow of a sunset. In the foreground, shadow-bathed cacti hugs a slice of desert, both illuminated by nature above and beyond. Peaceful, easy, breezy, organic, laidback, cohesive, warm yet cool: The picture parallels the tone and timbre of the content lurking in the vinyl grooves, and helps elevate Eagles to that rare place where every single aspect (and participant) is united in theme and purpose.

As just one of two Eagles albums created by the original quartet of Glenn Frey, Don Henley, Randy Meisner, and Bernie Leadon, the record remains unique in the band's history for the shared songwriting and vocal performances. Each member takes the lead on at least one track, extending to Meisner on "Most of Us Are Sad," "Take the Devil," and "Tryin'" as well as Leadon on "Train Leaves Here This Morning" and "Earlybird."

The mellifluous blending of the Eagles' distinctive voices, the very aspect that drew Johns to the project, lingers throughout. Such harmonizing – in combination with textured sonic tapestries stitched with acoustic guitars, steady bass lines, banjo notes, folk constructs, and edgy rock elements – informs arrangements bolstered by golden melodies and brilliant craftsmanship. Nowhere is that approach more evident than on "Take It Easy," an opening tune that quickly became a signpost of the collective's mentality, technique, and philosophy. Rambling, and related themes of traveling or returning home, resurface in "Train Leaves Here This Morning" and the restless "Take the Devil."

Women, another of the Eagles' other long-running inspirations, occupies much of the album's other focus. Frey's opportunistic "Chug All Night," the Top 25 smash "Peaceful Easy Feeling," and Jackson Browne's devotional "Nightingale" continue the light-streaked vibes. In contrast, Henley's cautionary "Witchy Woman" portends the darker concepts the band would explore going forward even as the song maintains a voodoo-kissed, feel-good mood. Indeed, few albums of the era felt better in both scope and spirit.

Take It Easy Witchy Woman Chug All Night Most of Us Are Sad Nightingale Train Leaves Here This Morning Take the Devil Earlybird Peaceful Easy Feeling Tryin'
Eagles' Desperado Mastered from the Original Analog Master Tapes for Definitive Sound: Pressed at RTI on MoFi SuperVinyl, Mobile Fidelity UD1S 180g 45RPM 2LP Set Features Opulent Box and Foil-Stamped Jackets  Western-Themed 1973 Album Pioneered Country Rock and Don Henley-Glenn Frey's Decades-Spanning Songwriting Partnership: Includes "Tequila Sunrise," "Saturday Night," and the Title Track Desperado seams to speak to a universally human theme – the notion that at heart we are all drifters, always searching in life for ever-elusive goals such as stability, companionship, belonging, and satisfaction. Marrying cohesive western-themed arrangements to conceptual narrative devices, the Eagles' 1973 album also hits on a tried-and-true American principle: The West, and the freedom, promise, and danger it has represented throughout U.S. history. Ambitious yet accessible, deep but direct, Desperado remains a towering influence on country rock and a crucial piece of the Eagles' development and evolution.

Strictly limited to 7,500 numbered copies, pressed on dead-quiet MoFi SuperVinyl at RTI, and mastered from the original analog master tapes, Mobile Fidelity's ultra-hi-fi UltraDisc One-Step 180g 45RPM 2LP collector's edition pays tribute to the record's significance and enhances the experience for generations to come. Playing with reference sonics that elevate an effort forever held dear by audiophiles, it provides a lively, dynamic, transparent, balanced, and intimate view of a release whose contemporary importance continues to grow. The opportunity to zero in on the particulars of the Eagles' golden harmonies, distinct vocal timbres, and interplay between acoustic and electric instruments has never been better.

Visually, the premium packaging and gorgeous presentation of the UD1S Desperado pressing befit its select status. Housed in a deluxe box, it features special foil-stamped jackets and faithful-to-the-original graphics that illuminate the splendor of the recording. No expense has been spared. From every angle, this UD1S reissue exists as a curatorial artifact meant to be preserved, touched, and examined. It is made for discerning listeners that prize sound quality and production, and who desire to fully immerse themselves in the art – and everything involved with the album, from the iconic photos to the meticulous finishes.

By design, Desperado is a record where appearances matter. Originally conceived as an album revolving around western motifs that involve outlaws, it saw the group dress up as cowboy exiles for a famous front cover shot taken by photographer Henry Diltz. The back cover is even more notable. A reenactment of the capture and death of the Dalton Gang, it displays the quartet as well as collaborators Jackson Browne and J.D. Souther bound on the ground. Standing above the band, a group of lawmen – including Johns, manager John Hartmann, and others – exudes pride. Staged at Paramount Ranch in Malibu Canyon, the project also involved the making of a short film that accented the album's commentary about the Eagles' loss of innocence in the face of music-biz machinations.

Metaphorical parallels between outlaws and rock stars carry through nearly every song. And still, the record retains a charm and ease many enterprising sets lack. Writing for Rolling Stone in 1973, Paul Gambaccini rightly observed: "The beautiful thing about it is that although it is a unified set of songs, it is not a rock opera, a concept album, or anything pretending to be much more than a set of good tunes that just happen to fit together."

None combine for a more memorable impact than the brilliant title track (recorded with the London Philharmonic Orchestra, cited by Rolling Stone as one of the 500 Greatest Songs of All Time, and sung by Henley in an unvarnished voice) or "Tequila Sunrise," a shot of courage that triggered Henley-Frey's collaborative partnership – one that endured for more than four decades. Also not to be missed: The four- and six-string workouts kicking up dirt on "Doolin-Dalton" and waltz signatures of "Saturday Night."

Desperado would do a slow burn on its way to Rock & Roll Hall of Fame-worthy status. Its era-spanning longevity and reappraisal within critical circles seemingly mirror the agelessness of its most famous songs, which remain staples in the band's concert staples to this very day. As much as any record in the band's catalog, it demands repeat plays. The folk-meets-California-rock feel, flawless craftsmanship, and organic choruses on everything from David Blue's "Outlaw Man" to "Twenty-One" (a smart reference to the age of Emmett Dalton when he got shot 23 times) practically jump out the LP grooves now that Mobile Fidelity has managed to present the music in the cleanest, clearest sound it's ever enjoyed.

Instead of utilizing the industry-standard three-step lacquer process, Mobile Fidelity Sound Lab's new UltraDisc One-Step (UD1S) uses only one step, bypassing two processes of generational loss. While three-step processing is designed for optimum yield and efficiency, UD1S is created for the ultimate in sound quality. Just as Mobile Fidelity pioneered the UHQR (Ultra High-Quality Record) with JVC in the 1980s, UD1S again represents another state-of-the-art advance in the record-manufacturing process. MFSL engineers begin with the original master tapes and meticulously cut a set of lacquers. These lacquers are used to create a very fragile, pristine UD1S stamper called a "convert." Delicate "converts" are then formed into the actual record stampers, producing a final product that literally and figuratively brings you closer to the music. By skipping the additional steps of pulling another positive and an additional negative, as done in the three-step process used in standard pressings, UD1S produces a final LP with the lowest noise floor possible today. The removal of the additional two steps of generational loss in the plating process reveals tremendous amounts of extra musical detail and dynamics, which are otherwise lost due to the standard copying process. The exclusive nature of these very limited pressings guarantees that every UD1S pressing serves as an immaculate replica of the lacquer sourced directly from the original master tape. Every conceivable aspect of vinyl production is optimized to produce the most perfect record album available today.

MoFi SuperVinyl
Developed by NEOTECH and RTI, MoFi SuperVinyl is the most exacting-to-specification vinyl compound ever devised. Analog lovers have never seen (or heard) anything like it. Extraordinarily expensive and extremely painstaking to produce, the special proprietary compound addresses two specific areas of improvement: noise floor reduction and enhanced groove definition. The vinyl composition features a new carbonless dye (hold the disc up to the light and see) and produces the world's quietest surfaces. This high-definition formula also allows for the creation of cleaner grooves that are indistinguishable from the original lacquer. MoFi SuperVinyl provides the closest approximation of what the label's engineers hear in the mastering lab.