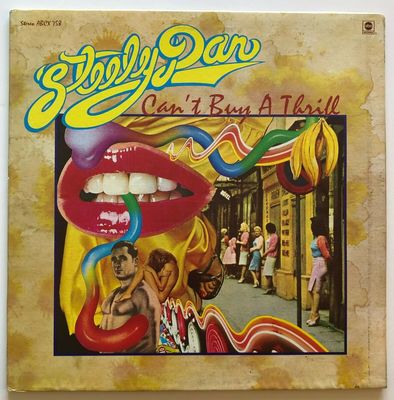 
I'm selling my personal record collection in preparation for moving.  We do not ship internationally or to Alaska, Hawaii, US Protectorates, P.O. Boxes or APO/FPO addresses.

Can't Buy a Thrill is the debut  by the American  band , released in November 1972 by . The album was written by band members  and , recorded in August 1972 at  in , and produced by . Its music features tight  and sounds from , , and , alongside philosophical, elliptically written lyrics.

The album was a commercial success, peaking at number 17 on the  and eventually being certified . It was also met with positive reviews and later appeared on many professional listings of the greatest albums, including 's  (2000) and  magazine's "" (2003).

Steely Dan recorded the album in August 1972 at  in . Two songs recorded during the Can't Buy a Thrill sessions were left off the album and released as a single: ""  "Sail the Waterway". This is the only Steely Dan album to include  as a lead vocalist, having been recruited after  expressed concerns over singing live. Drummer  also chips in lead vocals on one song, "Midnite Cruiser" (sometimes spelled "Midnight Cruiser"), as well as singing the "" single. By the time recording of the next album began, the band and producer  had convinced Fagen to assume the full lead vocalist role. Can't Buy a Thrill has appeared on many professional listings of the greatest albums. In 2000, it was voted number 207 in 's . In 2003, Rolling Stone ranked it number 238 on their list of , and 240 in a 2012 revised list, and number 168 in a 2020 revised list. Based on such rankings, the aggregate website  lists Can't Buy a Thrill as the 557th most acclaimed album in history, as well as the 154th most from the 1970s and the 13th most from 1972. Track listing

All songs written by  and .