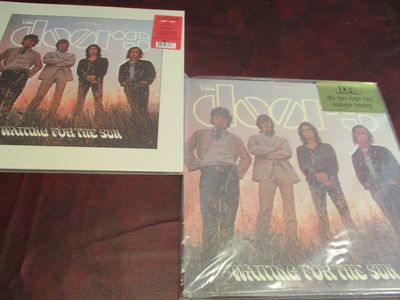 COLLECTORS NOTE: THIS DCC ANALOG 33 & 1/3 FULL LENGTH SINGLE LP AND INDIVIDUALLY NUMBERED 2265 OF 5000 PIECES WORLDWIDE HAS BEEN OUT OF PRINT FOR DECADES. SINCE THESE 1998 DCC HOFFMAN MASTERED ANALOG GEMS WERE PRESSED LONG OUT OF PRINT THEY ARE THE LAST 33 & 1/3 ANALOG PRESSED MASTERS EVER MADE OF THIS THE FULL LENGTH LP VERSION AND NONE OF THE RECENTLY PRESSED VERSIONS OF DOORS TITLES ARE LIMITED EDITION INDIVIDUALLY NUMBERED TO CONTROL THE SIZE OF THE PRESSING RUNS FOR COLLECTORS.

Remastered Audio + 14 Unreleased Studio & Live Recordings! THIS IS FOR THE COLLECTOR TO HAVE AS A PLAYER OR COMPARE TO THE 1998 ANALOG DCC MASTERPIECE. BUT IF YOU ARE A COLLECTOR YOU MIGHT WANT TO PLACE THIS DCC AUDIOPHILE PRESSING INTO YOUR COLLECTION STILL SEALED AS THE VALUABLE COLLECTIBLE IT IS.

All have Limited Edition numbers -- only 5,000 were pressed of this collector’s item. This LP is a piece of musical audiophile history and is the only Analogue Mastered Pressing of this classic Doors recording.

This is one of the last to ever be available of this Out of Print 180+ gram Vinyl Masterpiece. None of these Masterpieces will ever be pressed again and even makes these collectibles more limited than originally thought.

You should do your homework on this title and check with every music retailer you can find to see if this Masterpiece of Vinyl is available. Only then will this affirm to you how Rare this recording has become and you will understand that you are one of the last in the world to own this Rare Door’s Limited Edition Collectible.

This multi- million seller is by Rock n Roll’s 20th rated Group of All-Time. This 1968 recording by The Doors is widely regarded as their most lyrical and melodic album release. Many critics even feel that this is Jim Morrison’s and The Doors best album ever. A Billboard Charting #1 Album and a Platinum seller, Waiting For The Sun, yielded the smash #1 Single - Hello, I Love You - as well as other Door’s classics like - Love Street - The Unknown Soldier -Five To One - We Could Be So Good Together - and much more.

LIMITED EDITION. This Limited Edition FACTORY SEALED LP is an audiophile collector’s item that simply gives the feeling of being directly in the studio with the artist. This recording is re-mastered from the Original Session Tapes on DCC’s vintage Vacuum-Tube Playback System. The plating of the lacquers is done the same day as cutting using a slow low temperature bath to minimize groove echo and loss of frequency information. The result is the best sounding series of LPs in history.

This Out of Print collectible LP has all Liner Notes, Photos, and Artwork from the Original LP faithfully recreated.

A SONIC WORK OF ART. These Out of Print gems are the Finest/Rarest of the audiophile LP market. The future of these collectibles is so exciting because each piece is a sonic work of art that will never be reproduced using Vacuum-Tube Playback System.

The Doors released their third studio album, Waiting For The Sun, in July 1968. It was the band's third platinum album in less than two years, and the first to top the album chart. Since its debut, the album has sold millions of copies around the globe and contributed to the Doors' legendary canon, including the #1 smash, "Hello, I Love You".

To commemorate the 50th anniversary The Doors release WAITING FOR THE SUN: 50th ANNIVERSARY DELUXE EDITION. This 2-CD/1-LP collection features a new version of the album's original stereo mix on both CD and 180-gram vinyl LP, which has been newly remastered from the original master tapes by Bruce Botnick, the Doors' longtime engineer/mixer. The set also includes a second disc of 14 completely unreleased tracks: nine recently discovered "rough mixes" from the album recording sessions and five live songs from a September 17, 1968 Copenhagen show.

While going through his archive, Bruce Botnick uncovered a cache of rough mixes from the sessions that hadn't been played in 50 years. Botnick says: "I prefer some of these rough mixes to the finals, as they represent all of the elements and additional background vocals, different sensibilities on balances, and some intangible roughness, all of which are quite attractive and refreshing."

When the Doors recorded Waiting For The Sun in 1968, they were among the first bands to use Dolby A301 noise reduction processors, which was cutting-edge recording tech at the time. Similarly, the most advanced sound recording innovations were used to make the anniversary edition of Waiting For The Sun. The CD in this set has been encoded with the MQA process (Master Quality Authenticated). This is fully compatible with standard CD players. When connected to an MQA enabled device it will play the same disc in hi-res 176kHz/24 bit.

MQA (Master Quality Authenticated) has offered to us music lovers a way to listen to our favorite tunes in a manner that was intended by the original recording artists, without the limitations of file sizes previously described. Using a manner of "folding" the music files like origami, MQA is able to take the original analog recording resolution, and deliver it in a smaller file. Once that file gets processed through an MQA encoder (more on that in a bit), it then "unfolds" the file back to its fullest and highest resolution, thus providing us with a very similar resolution to what was produced in the recording studio. Granted, your playback quality will ultimately be determined by the system you have, but at least you’re working with a file that should at least in theory, mimic that of the original recording.

International Buyers – Please Note:
Import duties, taxes, and charges are not included in the item price or shipping cost. These charges are the buyer's responsibility. Please check with your country's customs office to determine what these additional costs will be prior to bidding or buying. Note: It's illegal to falsify customs declarations or mark an item as a "GIFT" or mark item at a LESSER VALUE in order to avoid customs fees

Check out Mymusicfix for additional Audiophile Vinyl by hitting “ME” OR the Mymusicfix STORE tab on the Title Purchase Page to view our current items up on E-Bay.

Mymusicfix has been told we have the best collection of Rare, Out of Print music collectibles on E-Bay.


Powered by
The free listing tool. List your items fast and easy and manage your active items.
Join Gripsweat!