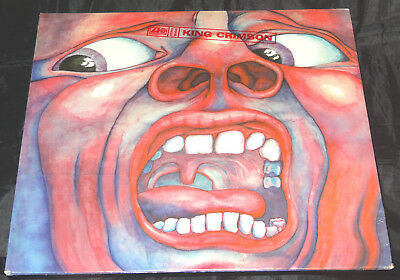 The group's definitive album, and one of the most daring debut albums ever recorded by anybody. At the time, it blew all of the progressive/psychedelic competition (the Moody Blues, the Nice, etc.) out of the running, although it was almost too good for the band's own good -- it took King Crimson nearly four years to come up with a record as strong or concise. Ian McDonald's Mellotron is the dominant instrument, along with his saxes and Fripp's guitar, making this a somewhat different-sounding record from everything else they ever did. And even though that Mellotron sound is muted and toned down compared to their concert work of the era (e.g., Epitaph), it is still fierce and overpowering, on an album highlighted by strong songwriting (most of it filled with dark and doom-laden visions), the strongest singing of Greg Lake's entire career, and Fripp's guitar playing that strangely mixed elegant classical, Hendrix-like rock explosions, and jazz noodling. Lineup changes commenced immediately upon the album's release, and Fripp would ultimately be the only survivor on later King Crimson records.

A3a  March For No Reason

B2a  The Return Of The Firewitch

B2b  The Dance Of The Puppets

GATEFOLD COVER IS STILL SEALED AND COVERED IN ITS ORIGINAL SHRINK WRAP W/ SOME CORNER WEAR AND HYPE STICKER.

No split seams
No creases No holes
No cut-out corners
No saw-marks or indents
No dirt/dust rubbing stains (friction marks caused by rubbing against other covers)
No yellowing from aging
No writing
No tape
No water damage
No warping
No wax, glue, paint or liquid drops on the cover
No glue traces or wax residue.