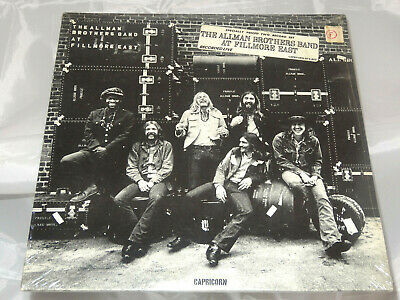 At Fillmore East is the first live album by American rock band the Allman Brothers Band, and their third release overall. Produced by Tom Dowd, the album was released in July 1971 in the United States by Capricorn Records. As the title indicates, the recording took place at the New York City music venue Fillmore East, which was run by concert promoter Bill Graham. It was recorded over the course of three nights in March 1971 and features the band performing extended jam versions of songs such as "Whipping Post", "You Don't Love Me" and "In Memory of Elizabeth Reed." When first commercially released, it was issued as a double LP with just seven songs comprising four vinyl sides.

At Fillmore East was the band's artistic and commercial breakthrough, and has been considered by some critics to be one of the greatest live albums in rock music. It has also been ranked among the best overall albums by artists and continues to be a top seller in the band's catalog, becoming their first album to go platinum. In 2004, the album was selected for preservation in the Library of Congress, deemed to be "culturally, historically, or aesthetically important" by the National Recording Registry.Reviews of the album were negative, commenting on a lack of energy, formulaic songwriting, and indifferent sound. The album reached #5 on the Billboard 200 albums chart based on their previous popularity. The record had been highly anticipated a year earlier, but now the Allmans' moment was passing.

GATEFOLD COVER IS STILL SEALED AND COVERED IN ITS ORIGINAL FACTORY SHRINK WRAP W/ SOME CORNER WEAR AND STICKERS.

No split seams No creases
No cut-out (drill) holes
No cut-out corners
No saw-marks or indents
No dirt/dust rubbing stains (friction marks caused by rubbing against other covers)
No yellowing from aging
No writing
No tape
No water damage
No warping
No wax, glue, paint or liquid drops on the cover
No glue traces or wax residue.