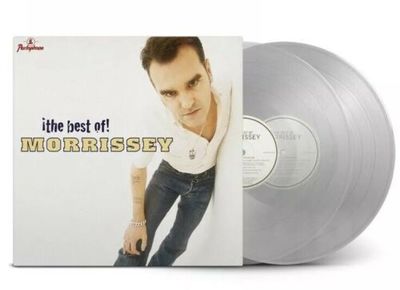 The legendary singer’s 2001 hits collection makes its vinyl debut as a limited edition 2LP clear vinyl. Each album is individually numbered on a special card insert.

Morrissey surpassed the commercial success of his former band The Smiths after the singer-lyricist launched a solo career in 1988. Over the next 10 years, “Moz” released six studio album and a string of hit singles before going on a brief recording hiatus. On 6th November 2001, The Best Of Morrissey, a collection that brought together his most memorable work as a solo artist up to that point, was originally released on CD in North America only.

Morrissey revisits that classic compilation by releasing it, for the first time ever, on vinyl. This one-off special run on clear vinyl has been individually numbered on a special card insert

The More You Ignore Me, The Closer I Get

Do Your Best And Don't Worry

The Last Of The Famous International Playboys

We Hate It When Our Friends Become Successful

Now My Heart Is Full (Edit)

I Know It's Gonna Happen Someday

Hold On To Your Friends