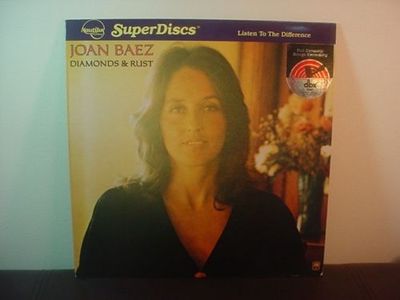 With the Vietnam War winding down, Joan Baez, who had devoted one side of her last album to her trip to Hanoi, delivered the kind of commercial album A&M Records must have wanted when it signed her three years earlier. But she did it on her own terms, putting together a session band of contemporary jazz veterans like Larry Carlton, Wilton Felder, and Joe Sample, and mixing a wise selection from the work of current singer-songwriters like Jackson Browne and John Prine with pop covers of Stevie Wonder and the Allman Brothers Band, and an unusually high complement of her own writing. A&M, no doubt recalling the success of her cover of the Band's "The Night They Drove Old Dixie Down," released her version of the Allmans' "Blue Sky" as a single, and it got halfway up the charts. But the real hit was the title track, a self-penned masterpiece on the singer's favorite subject, her relationship with Bob Dylan. Outdoing the current crop of confessional singer/songwriters at soul baring, Baez sang to Dylan, reminiscing about her '60s love affair with him intensely, affectionately, and unsentimentally. It was her finest moment as a songwriter and one of her finest performances, period, and when A&M finally released it on 45, it made the Top 40, propelling the album to gold status. But those who bought the disc for "Diamonds & Rust" also got to hear "Winds of the Old Days," in which Baez forgave Dylan for abandoning the protest movement, as well as the jazzy "Children and All That Jazz," a delightful song about motherhood, and the wordless vocals of "Dida," a duet with Joni Mitchell accompanied by Mitchell's backup band, Tom Scott and the L.A. Express. The cover songs were typically accomplished, making this the strongest album of Baez's post-folk career. Review - William Ruhlmann.

Hello, I travel frequently on weekends so if you email me or pay for an item on Friday or Saturday i may not respond until i return home Sunday nights. Kind Regards, Jeff