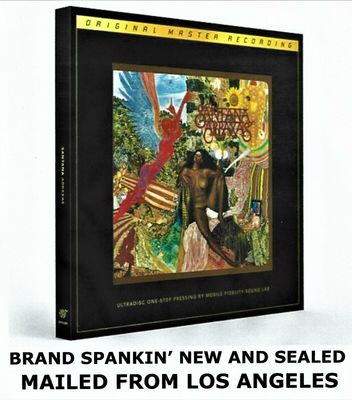 The 2-LP boxed set was made by MFSL and is highly collectible.  I WILL MAIL IT TO YOU WITH TENDER LOVING CARE, INCLUDING USPS TRACKING.  I WILL EVEN INSURE IT FOR LOSS AND DAMAGE, WHILE IN THE HANDS OF THE USPS, FOR THE MAXIMUM ALLOWABLE AMOUNT, FOR FREE.  WHO ELSE DOES THAT?  YOU WILL LOVE IT.  The pictures shown are stock photos.  I've had a few of these great sets and keep searching for more (which is really getting difficult and very expensive). To make things easier for me, I show these stock photos, without a number, (normally printed within that space provided) which represents a Brand New, Sealed set. Other than the number, they are all identical. If a number is requested by a potential buyer I will tell them the next lowest number I have at the time.  As far as pressing, they are all from Mobile Fidelity's exclusive UltraDisc One-Step (UD1S) series.

The title is from the ultra-rare MFSL series of audiophile LPs.

LPs made in the USA

Pressings are in STEREO

Made with 180-gram vinyl, comes in a luxurious boxed set

Record vintage = limited and numbered edition, made in 2016

The BOX SET is in Mint condition. Everything is factory sealed and perfect.

Second studio album from the Carlos Santana band and widely acclaimed as his masterpiece, presented here with corrected stereo channel orientation, newly remastered and sounding better than ever as the result of being expertly remastered from the Original Analog Master Tapes by MFSL with the new Ultradisc One-Step UD1S process!