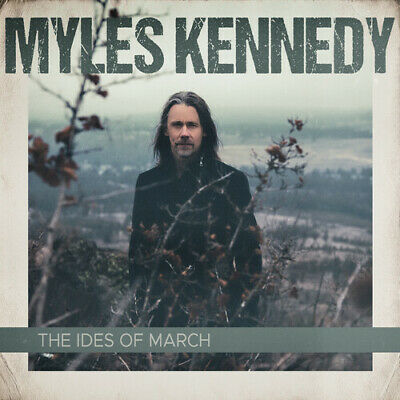 IDES OF MARCH - Miles Kennedy - Iconic frontman and instrumentalist MYLES KENNEDY (Alter Bridge, Slash ft. Myles Kennedy & The Conspirators) proves that tumultuous downtime can spark creative genius with The Ides Of March - the long-anticipated full-length follow up to his 2018 solo debut, Year Of The Tiger. The Ides Of March once again showcases the organic side of Kennedy's musical spectrum and one-of-a-kind voice, but while bright inclusions of lap steel and mandolin have replaced some of the pummeling kick drum and downtuned electric riffage his other renowned projects are known for, each of it's offerings maintain the same steadfast energy that never relents. Fluxing between heritage rock outcries featuring Jimmy Page-worthy solos, and stripped-down, bluesy beckonings, the album manifests as an uplifting refresher arriving when society needs it most. Lyrically, the album's 11 unique offerings embrace all listeners, championing themes of unity and solidarity over separation and spite, allowing the sonic warmth of each track to stand out. Opening stunner "Get Along" proves itself as an anthem for the times, giving listeners a hard-rocking first dose of MYLES KENNEDY's iconic vocal attack and guitar prowess, ushered along by an addictive hook: "Why can't we all just get along?" The album rocks and twangs with timeless spine-tinglers like "A Thousand Words" and slide guitar-laden lead single/future classic "In Stride". Kennedy slows it down with triumphant, smooth vocal knockout "The Ides Of March", topped with a jazzy guitar solo and poetic lyricism crooning for camaraderie in our darkest times. Raucous blues-rocker "Wake Me When It's Over" and passionate, ethereal "Love Rain Down" astound, while earworm lead-ignited "Tell It Like It Is" and swaying sing-a-long standout "Moonshot" successfully mark Kennedy's "dual-citizenship" in the realms of rock and country inspiration. Acoustics, mandolin and slide guitar pepper the soft benevolence of "Wanderlust Begins" and classic rock-inspired wakeup call "Sifting Through The Fire", before bluesy success "Worried Mind" provides the listener with one last slab of verification that MYLES KENNEDY is an undeniable talent for the ages. The Ides Of March doubles down on the charging roots rock vibes of it's predecessor while exuding an aura of tenderness and inner peace - radiating the sorely needed, uplifting spirit of Americana rock.