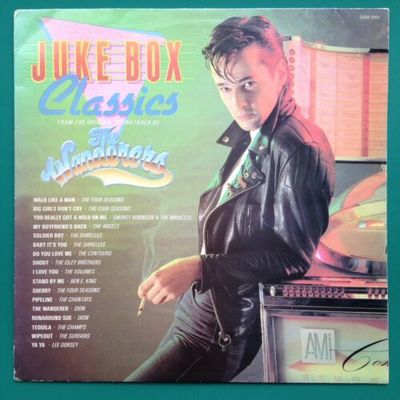 
Here I have for sale the British reissue soundtrack to the film 'The Wanderers' (1979), starring Ken Wahl, Karen Allen, John Friedrich and Toni Kalem.

This Philip Kaufman coming-of-age teenage movie is set against the urban jungle of 1963 New York's gangland subculture, and around the Italian gang ‘The Wanderers’.

Condition (refer also to notes at bottom):
Vinyl – VG. Wonderfully clean on visual inspection. A few light hairlines and scuffs on both sides. Played just pre-listing and sound clarity is decent throughout. Some slight static and light clicks in places but nothing major. No skipping, jumping or sticking. A really enjoyable listen.
Outer sleeve (cover) – VG. Colours remain vibrant and unfaded. Fantastic gloss front. Creasing in from top, bottom and spine edges. A number of small dents on front. All corners are dented and scuffed. Spine is creased and worn mainly at top and bottom. Top edge shows intermittent wear, bottom edge is worn towards both corners. Aperture is clean and only mildly nicked. Reverse side is generally clean and unsoiled. Some creasing in bottom left and right corners mainly as well as spine and a few other creases elsewhere. Overall very good.
Inner sleeve – G. Original. Off-white paper with curved corners and central hole on one side. Folds/creases all over but it remains intact.

Payment by cheque (UK only) or Paypal please.

Please see my other soundtrack listings.

Thanks for looking and happy eBaying!


ITEM CONDITION - items are graded according to Record Collector definitions - see below:

MINT: The record itself is in brand new condition with no surface marks or deterioration in sound quality. The cover and any extra items such as the lyric sheet, booklet or poster are in perfect condition. Records advertised as Sealed or Unplayed should be Mint.

EXCELLENT: The record shows some signs of having been played, but there is very little lessening in sound quality. The cover and packaging might have slight wear and / or creasing.

VERY GOOD: The record has obviously been played many times, but displays no major deterioration in sound quality, despite noticeable surface marks and the occasional light scratch. Normal wear and tear on the cover or extra items, without any major defects, is acceptable.

GOOD: The record has been played so much that the sound quality has noticeably deteriorated, perhaps with some distortion and mild scratches. The cover and contents suffer from folding, scuffing of edges, spine splits, discolouration, etc.

FAIR: The record is still just playable but has not been cared for properly and displays considerable surface noise; it may even jump. The cover and contents will be torn, stained and / or defaced.

POOR: The record will not play properly due to scratches, bad surface noise, etc. The cover and contents will be badly damaged or partly missing.

BAD: The record is unplayable or might even be broken, and is only of use as a collection filler.