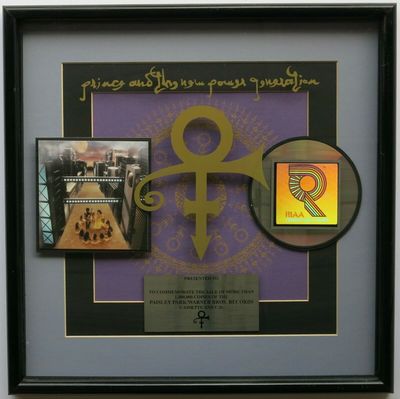 
An original RIAA Platinum Record Award for Prince's "Love Symbol" album, presented to a senior executive of the group's record label, Warner Bros. Records.  Recordmecca's Jeff Gold is a former executive vice president of Warner Bros, and the art director of this album, and obtained this from a former co-worker.  We have blurred out the executive's name on the photos for their privacy, but it appears on the actual award.

The award measures 17 x 17", is completely original and in excellent condition, with a few small scratches to the frame and front of plexiglass.  Guaranteed authentic with no time limit.  See our other listings for more great record awards.