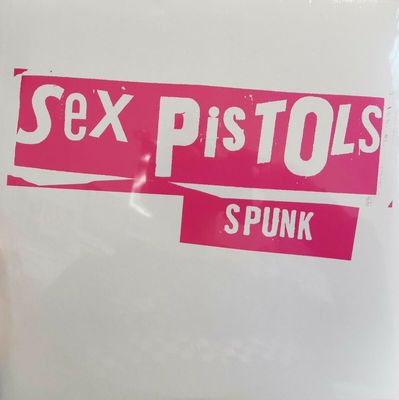 Official release of the original demo version of NMTB.

Several parties, including some journalists in the

for the original Spunk bootleg. This would have

been in breach of the band's record contract with

Virgin, which was readying the release of Never

Mind the Bollocks when Spunk appeared. An

discussed Spunk and made reference to this

conveniently coincidental timing.  The evidence for

McLaren's involvement is speculative, although it

can be noted that his company, Glitterbest, retained

the rights to the demo recordings as well as the

master tapes – and the demos appearing on Spunk

were presented in excellent quality.

Some Sex Pistols fans concur with McLaren  – and

producer Goodman – that the raw versions of the

songs on Spunk are superior to the officially

released ones, particularly since Spunk

approximates a faithful reproduction of the original

features the bass-lines of Glen Matlock, which were

over bass duties for the recording of Never Mind the

Spunk is therefore often cited as the Sex Pistols' de

part or all of Spunk had been played to Tony

Parsons as early as March 1977, and became the

subject of his NME article, "Blank Nuggets in the

UK", which described the recordings as if they

Combine items to save on postage.

YOU CAN ADD TRACKED & REGISTERED / INSURED MAIL AT £5 ANYWHERE

– This provides NEXT DAY DELIVERY in the UK (please allow for processing).

WE ONLY USE PROPER RECORD MAILERS TO POST ITEMS –

SO YOU RECEIVE THE ITEMS IN MINT CONDITION!

and ITALY otherwise parcels are at your own risk!

Outside the UK REGISTERED mail provides full tracking and

insurance - the fee is per parcel. If you want your item(s)

tracked choose this option at the check-out.

Due to increased incidents of fraud we are having to insist that all purchases over £40.

£40 are sent by REGISTERED MAIL at an additional cost of £5.00 per parcel.

This will be added onto your invoice.  Please note that the POSTAL SERVICE to ITALY is

very slow and items can easily take OVER 1 MONTH to arrive.