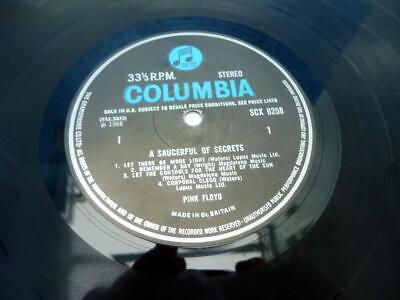 "A SAUCERFUL OF SECRETS"

ON OFFER ANOTHER RARITY BY PINK FLOYD, THE LP TITLED “A SAUCERFUL OF SECRETS” AND THIS IS A ORIGINAL 1968 UK RARE STEREO 1ST PRESSING CHARACTERISED BY THE BLACK MATE LABEL WITH COLUMBIA LETTERS AND MUSICAL LOGO NOTE IN BLUE AND “GARROD & LOFTHOUSE” STEREO TRIFOLD COVER!

“A Saucerful of Secrets” is the second album by rock band Pink Floyd, and marks the group's stylistic change from psychedelic to progressive rock. It was recorded at EMI's Abbey Road Studios, at various dates from August, 1967 to April, 1968. Due to Syd Barrett's declining mental state, this was to be the last Pink Floyd album that he would work on.

During its difficult recording sessions, Barrett became increasingly unstable and in January of 1968, David Gilmour was brought in. Barrett was finally removed from the band by early March, leaving this new incarnation of Pink Floyd to finish the album.

As well as "Jugband Blues", the album was to include "Vegetable Man," another Syd Barrett song. However, the band believed "Vegetable Man", with its autobiographical lyrics, was unsuitable for inclusion and so it was left off the album. The song was to appear on a single as the b-side to another unreleased track, "Scream Thy Last Scream".

Two additional Syd Barrett songs, "In The Beechwoods" and "No Title" were also recorded early in the sessions for the album.

An image of the Living Tribunal from Marvel Comics can be seen in the cover's upper left corner. "Set the Controls for the Heart of the Sun" is the only Pink Floyd song that features all five band members.

Keyboardist Rick Wright sings lead or backing vocals on four of the album's seven songs, making this the only Pink Floyd album where Wright's vocal contributions outnumber those of the rest of the band.

The vinyl has been well played and frequently and is graded visually in excellent minus condition for side 1 and in very good condition for side 2. Please note that this vinyl is over 54 years old and will not transform in anything different to the condition listed.

The front laminated sleeve with HIPGNOSIS design is in excellent minus condition with creases, edge and corner wear. The Foldover triple flipback sleeve says at top foldover of back cover "File under POPULAR : Pop Groups." At bottom foldover of back cover it says "6807 TPS Printed and made by Garrod & Lofthouse Ltd. Patents pending SX6258 / SCX6258" and is well printed due to the dark contrast. It has the missprint "GILMORE" in the title track.

The spine is in very good plus condition with a dent in the centre and corner wear.

The Columbia BLUE and black labels are in excellent  condition.

The original EMI inner with promotional material (Scafold on right corner and previous Pink Floyd LP on bottom left of the other side) is in near mint condition.

Photos are of the actual item.


THIS LP IS SERIOUSLY RARE AND VIRTUALLY IMPOSSIBLE TO FIND. DON’T MISS OUT ON THIS AMAZING OPPORTUNITY TO OWN A PIECE OF ROCK HISTORY.


DUE TO THE VALUE OF THE ITEM PLEASE WAIT TO GET AN INVOICE WITH THE CORRECT POSTAGE INCLUDING FULL INSURANCE. IN THE UK THE LP WILL BE POSTED ONLY BY NEXT DAY DELIVERY AT A MINIMUM COST OF 11.80 POUNDS AND NOT AT 9.50 WHICH IS THE MAXIMUM THAT EBAY HAS FOR THE VINYL CATEGORY.​

PLEASE VISIT MY OTHER ITEMS AS I REGULARLY LIST RARE ORIGINAL LPs FROM JIMI HENDRIX, LED ZEPPELIN, LOVE, WHO, CREAM, PINK FLOYD, BOWIE, ETC... AS WELL AS INDIE CDs FROM THE LAST DECADE.
Visually-graded vinyl: A visual grading will identify physical flaws (such as scratches) and can help determine whether a record has been cared-for properly. A visual grading will not identify noise or crackle caused by non-visible sources. Most of the records I sell are between thirty and sixty years old and so it is likely that there may be some background noise even if they look perfect.

Play-grading MONO records: Mono records and stereo records have different grooves. A stereo record produces a stereo sound via both lateral and vertical groove modulation whereas a mono record is not intended to produce any sound from vertical modulation. Playing a mono record with a stereo cartridge will create distortion because it is trying to pick-up the vertical (stereo) part of the signal, whereas this is not intended to be heard on a mono record and so is just noise.  Using a pre-amp with a mono switch will eliminate the noise caused by vertical modulation leaving just the lateral groove signal which is how the record was intended to be heard. If you do not have a mono switch on your amp or pre-amp you will be reproducing the noise from the vertical part of the signal and so the record will not sound as good. This is not any fault of the record, it is inherent to playing any mono record through a system that it was not designed for.
Guide to grades used

Near Mint
Cover - Looks virtually new with signs of handling- Minor wear creases but no marks or damage. Light sleeves may show slight discoloration due to age.
Disc - The record has had little play and has minor scuffs &/or hairline scratches mostly caused by moving record in & out of paper sleeve

Excellent
Cover - Signs of wear on edges/spine, corners or ring wear. No damage caused by sticker removal/residue.
Disc- The record has been played and has light marks &/or hairline scratches and paper scuffs.

Good
Cover - Heavy ring or edge/spine wear. Corners noticeable bashed. Heavy creases. Considerable laminate/surface damage.
Disc - The record looks very well played and the sound quality has probably deteriorated noticeably. A lot of surface marks/scratches. Usually used as collection filler
I am not a dealer but an amateur collector selling duplicated items or records that I no longer want to keep (mostly due to space). Unless indicated in the listing the records have been only visually inspected.

To show your record has arrived safely and you are happy, please leave feedback and I will reciprocate.

I offer reduced postage rates for combined multiple purchases. To protect the environment I recycle packing materials. Usually I post items on Thursdays.

All items are properly packaged and I always obtain proof of postage.

PLEASE NOTE WHEN LEAVING FEEDBACK THAT EBAY AND PAYPAL COMBINED CHARGE COMMISSION ON THE PRICE OF THE POSTAGE HENCE WHY IT MAY LOOK EXPENSIVE.

I am happy dealing with international bidders but only accept PayPal and please contact for p&p costs.

Please visit my other items as I regularly list LPs, CDs, music magazines and motor books.