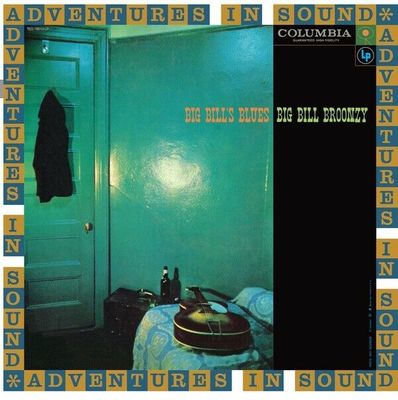 
BIG BILL BROONZY
BIG BILL'S BLUES
TRAFFIC RECORDS, 2020 LP
"Born Lee Bradley Conley, the revered blues musician Big Bill Broonzy first picked up performing at the early age of 10, playing a violin made from a cigar box.
He switched from fiddle to guitar in the 1920s, after returning from a two-year World War One service in Europe, and immediately leaving his home in Arkansas for Chicago, sensing opportunity.
From there, Broonzy immediately set to work establishing himself, performing at various parties and social gatherings.
Throughout the late 20s and into the 1930s, Broonzy's fortunes gradually increased as word spread of his talents.
During this time he recorded numerous singles for classic blues labels like Paramount, Gennett, Champion, and Vocalion, and began to regularly perform in Chicago's South Side venues.
Broonzy was one of the few classic bluesmen to record with a full band, but he particularly defined himself from his peers through the remarkable range and power to his singing voice, which served him well as blues started to give way to the earliest incarnations of R&B music.
Big Bill Broonzy also set himself apart from his contemporaries into the 1940s.
Many of the progenitor bluesmen of the time had given up music during the Great Depression, but Broonzy persisted, and continued to evolve his sound beyond traditional country blues.
During this time, Broonzy would record one of his best-known singles, 'Key To The Highway', (a blues standard which would also be covered by Little Walter, Eric Clapton, and the Rolling Stones) and set the stage for a new wave of blues performers, and later rock and rollers, by being among the first of his genre to introduce electric instrumentation into his act.
The 1950s were a banner year for traditional folk and country blues, where renewed interest in the styles led to new audiences in England and America.
As numerous classic bluesmen began to come out of retirement to perform, Broonzy was already several steps ahead, having found success as part of a touring folk revue, and was featured alongside legendary folk singers such as Pete Seeger and Brownie McGhee.
He continued to perform across folk and jazz clubs earning critical praise and standing ovations up to his death in 1958, having left behind an indelible blues legacy that inspired a wealth of legends, from Muddy Waters to Eric Clapton to Jerry Garcia."
New Condition - Never Played - Sealed
FREE SHIPPING IN THE USA!
SATISFACTION GUARANTEED!
B14