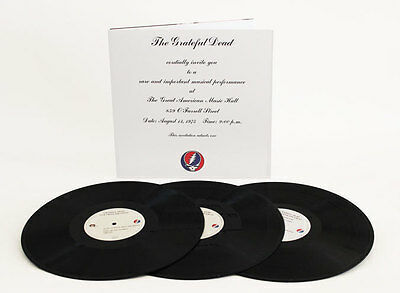 
Hello & welcome to our eBay store. One From The Vault: Live at the Great American Music Hall, San Francisco 8/13/75

- Back in print on vinyl after 22 years - First ever American LP release - Newly re-mastered by Joe Gastwirt - Lacquers cut by Kevin Gray For a legacy filled with legendary performances, the Grateful Dead Live at the Great American Music Hall in San Francisco on August 13th 1975 stands out. The band only played 4 shows during that entire year! (Remarkable for a band that toured non-stop for decades) and at their August 13th show, they rolled multi-track tape (which allowed for the band decades later to properly mix the show). Because the Great American Music Hall holds less than 1,000 people (another unique thing about this show), it was an invitation only performance in which the band debuted their recent studio album Blues For Allah in a live setting. Although One From The Vault has been available on CD nearly continuously since 1991, the vinyl version was only available for less than a year (and in Europe only) in the early 1990’s. This deluxe vinyl reissue marks the first time this legendary show has been available anywhere in over 20 years and the first time in America. Rolling Stone magazine has described One From The Vault as: “The closest the Dead came in the Seventies to the band’s trippy, late-Sixties peak, and the performance indulged the group’s jazzy, free-form impulses even further. “Help on the Way,” “Franklin’s Tower” and “The Music Never Stopped” cohere into a twenty-minute song cycle. “King Solomon’s Marbles,” a tumbling, polyrhythmic instrumental by bassist Phil Lesh, crackles with energy. Inventive percussion duets by Mickey Hart and Bill Kreutzmann are appended to “Eyes of the World,” as well as to the pretty, elliptical “Crazy Fingers.” The crowning touch is “Blues for Allah,” which runs 21 minutes and explores inner space with a meditative intensity barely hinted at on the studio version.” We have been providing great bargins and quality merchandise on eBay since 1999. We always strive to provide our customers with the best online shopping experience possible. We use thick cardboard mailers specially designed for shipping records. As well we provide additional padding to make sure that your record will arive to you as minty fresh as possible. On the rare ocassion that there is something wrong with your order when you receive it please do not hesitate to contact us and we will fix it right away and make sure you are fully satisfied with your purchase.

This record is brand new and unplayed!

Check out my other auctions for tons of great albums and save on shipping! Only $2 shipping to add any other LP to your order within the USA.