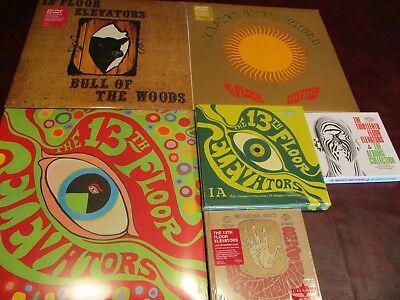 - THE PSYCHEDELIC SOUND OF

AND BULL IN THE WOODS - BOTH  COLLECTORS DOUBLE VINYL  LIMITED EDITIONS

4 TITLES AND BOXES WITH 13 SIDES OF FLOOR ON VINYL

ALL FACTORY SEALED LP -  The nicest thing you can do for your stylus and ears. The ultimate record – the way music was meant to be heard.

THE CD SETS ARE -

You should never pass up the opportunity to upgrade your collection. They're each very limited in their pressings and disappear with extraordinary quickness from the vinyl market. This causes prices to skyrocket because once they are gone, they are gone forever! Don't second-guess yourself with this chance to upgrade your collection because before you know it, the opportunity will have passed forever.

An eight-count 7" single set compiling this legendary Texas psychedelic band's complete singles output between 1966 & 1968 for the IA label (plus the rare-as-hen's-teeth '65 pre-Elevators Spades 45); each 7" is pressed on a different colored vinyl: you get white, orange, blue, green, red, yellow, purple and clear!

The 13th Floor Elevators were one of the pioneering bands of psychedelic music; many have cited them as the first true psychedelic rock band, and if they weren't, they certainly predated most of the San Francisco bands that gave the sound a global audience, writes AllMusic. The Elevators played a bracing fusion of garage rock and genre-defying musical exploration powered by Roky Erickson's feral vocals and rhythm guitar, Stacy Sutherland's concise but agile lead guitar work, and Tommy Hall's amplified jug playing, the latter of which gave them a sound unlike any other in rock.

6. Before You Accuse Me

9. Slip Inside This House

12. May The Circle Ramin Unbroken

"The fearless trailblazers of psychedelia and one of the most kick-ass rock bands ever... For two or so years they burned with a flame so fierce that 40 years on they still remain an inspiration." MOJO

More so than Roky Erickson (who was mired in drug abuse and legal problems), guitarist Stacy Sutherland led the way on the 13th Floor Elevators' last studio LP (1968). It's a hypnotic, reverb-drenched, fuzzed-out psychedelic gem that's too often overlooked in favor of their earlier albums. The remastered stereo edition joins the mono version of their lost third album A Love That's Sound; includes "Livin' On," "Street Song," "Dear Dr. Doom," "Scarlet and Gold," "Wait for My Love"  and more!

2014 2 LP reissue on 180-gram vinyl. Gatefold cover. If The 13th Floor Elevators didn't invent the psychedelic sound, they were certainly among it's earliest explorers with the original release of this album in the August of 1966. Clever use of instruments and sound effects, along with the ponderous lyrical explorations of an acid trip, The 13th Floor Elevators expanded minds and the music industry. This twin LP reissue features the remastered original album in mono sound. It also features the stereo version, with the songs arranged in the order the band originally wanted fans to listen to them. Each album is made of 180-gram vinyl. They come in a handsome replica gatefold album cover. Charly.

Originally released in 1966 on International Artists, The Psychedelic Sounds Of The 13th Floor Elevators is the groundbreaking debut album from Austin, TX psychedelic-rock purveyors The 13th Floor Elevators featuring the band's only hit single "You're Gonna Miss Me" which was also included on the original 1972 Nuggets compilation.
Exploring the outer limits of both music and the mind, it is alleged that the band was under the influence of LSD for every rehearsal, performance and recording session. This is reflected on The 13th Floor Elevator's distinct and influential kaleidoscope sound which was shaped by the unearthly banshee howl of Roky Erickson, the blistering guitar of Stacy Sutherland and the demented electric jug of Tommy Hall.
Double heavyweight 180g vinyl edition of the 13th Floor Elevators’ incendiary debut featuring re-mastered mono and stereo mixes plus the band’s intended running order. Previously only available as part of the band's award-winning Music Of The Spheres boxset, this is the first vinyl reissue from tape sources of the stereo edition for over three decades. LP1 is the remastered mono edition and LP2 a remastered edition of the original stereo mix.
"The fearless trailblazers of psychedelia and one of the most kick-ass rock bands ever...For two or so years they burned with a flame so fierce that 40 years on they still remain an inspiration." - MOJO
The 13th Floor Elevators The Psychedelic Sounds Of The 13th Floor Elevators Track Listing:

Limited 180gm gold colored audiophile vinyl LP pressing. The 13th Floor Elevators' second album for International Artists, Easter Everywhere is essentially an extension of the sound of their groundbreaking debut. Another bona fide psychedelic classic, it's standout tracks include the eight-minute epic, "Slip Inside This House" and an inspired cover of Bob Dylan's "(It's All Over Now) Baby Blue." The only 13th Floor Elevators LP to make the Billboard chart captures the group at their absolute peak. Released in November 1967, a year after their debut LP 'Psychedelic Sounds', the band, critics and fans alike consider 'Easter Everywhere' to be the Elevator's finest work. Produced by Lelan Rogers, the music is delivered with an informed power and intensity of knowing. Even the quieter tracks, 'Dust' and 'Had To Tell You' display a restrained beauty and purity of vision which perfectly counterbalance the intensity of 'Earthquake' and 'Slip Inside This House'.

2014 two CD pressing. LIVE EVOLUTION LOST: The 13th Floor Elevators LIVE AT THE HOUSTON MUSIC THEATER is the first ever release of the complete performance of the band's legendary show from 18th February 1967. The Elevators followed their own spiritual cosmic route searching for a new path to enlightenment whilst all the while creating a reputation for excess. The band developed a sound that merged garage-punk and psychedelic experimentation. This two CD media-book edition catches the band with it's classic line-up before the release of EASTER EVERYWHERE and is the only known complete recording of an Elevators' gig, and the latest to survive. Put together by band expert Paul Drummond, who also contributes extensive liner notes and mastered by Sonic Boom (Spacemen 3), this release also includes one reel unissued for over 45 years.

13TH FLOOR ELEVATORS BULL OF THE WOODS
4CD SET THE ELEVATORS THREE IA ALBUMS
PLUS NEW MIX OF LIVE ALBUM IN A CLAM BOX
The fearless trailblazers of psychedelia and one of the most kickass
rock bands ever... For two or so years they burned with a flame
so fierce that 40 years on they still remain an inspiration Mojo
This 4CD set contains all four of the original Elevators albums that
were released on the International Artists label from 1966 to 1968,
re-mastered and collected in a clam box with extensive new notes
by band expert Paul Drummond.
In addition to the stereo versions of the three studio albums, which
were re-mastered and remixed from the original tapes in 2007
by the original producer Walt
Andrus, the set also includes
a completely new mix 1968 s
Live album, minimizing the
fake applause that were added
to the recordings and removing
glitches which blighted previous
versions.

Import duties, taxes, and charges are not included in the item price or shipping cost. These charges are the buyer's responsibility. Please check with your country's customs office to determine what these additional costs will be prior to bidding or buying. Note: It's illegal to falsify customs declarations or mark an item as a "GIFT" or mark item at a LESSER VALUE in order to avoid customs fees

Mymusicfix has been told we have the best collection of Rare, Out of Print music collectibles on E-Bay. FOLP COLOREDVINYL