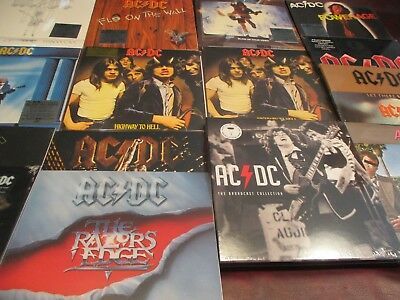 
THIS COLLECTION IS A SECOND PART OF A CUSTOMER REQUEST FOR TO OUR AC/DC COLLECTION IN TO SEPARATE ORDERS WITH A VALUE OF $400 EACH WITHIN THIS SECOND REQUEST ARE 5 TITLES WHICH ARE THE ORIGINAL 1ST EDITION Factory Sealed OF THIS LIMITED EDITION 180 GRAM AUDIOPHILE PRESSING WITH THE ORIGINAL SILVER MARKETING STICKER THAT WAS ANNOUNCING THE RELEASE OF THIS AC/DC COLLECTION IN 180 GRAM 2003 PRESSED ISSUES AND ONLY  ATTACHED TO THESE COLLECTORS 1ST GENERATION EDITIONS.

THIS IS THE ONLY WAY YOU CAN VERIFY YOU OWN AN ORIGINAL COLLECTORS RELEASE DATE PRESSING. THE NEXT GENERATIONS OF THESE PRESSING NO LONGER HAS THIS STICKER. Remastered from the original mix-down 2-track masters for unprecedented sonic brilliance.  The nicest thing you can do for your stylus and your ears. The ultimate record -- the way music was meant to be heard.

PLUS  PLUS THIS RARE OUT OF PRINT SIMPLY VINYL UK PRESSING

180 Gram LP - The nicest thing you can do for your stylus and your ears. The ultimate record -- the way music was meant to be heard.

You should never pass up the opportunity to upgrade your collection. They're each very limited in their pressings and disappear with extraordinary quickness from the vinyl market. This causes prices to skyrocket because once they are gone, they are gone forever! Don't second-guess yourself with this chance to upgrade your collection because before you know it, the opportunity will have passed forever.

the FIVE SILVER STICKER EDITIONS ARE:

AC/DC was already the biggest band in the world when master horror writer (and huge fan) Steven King asked them to contribute music to his 1986 film Maximum Overdrive. Filled with nightmarish images of cars, trucks, jukeboxes, and all other types of heavy metal machinery coming to life, the film was perfectly suited to the take-no-prisoners rock of AC/DC. Contributing 3 new songs to the film, as well as 6 certifiable rock classics, the soundtrack also re-ignited interest in AC/DC's catalog and made You Shook Me All Night Long a staple at MTV.

The ONLY compilation Certified Xx Platinum in the US! Features the classics Who Made Who, D.T. and You Shook Me All Night Long.

By 1983, AC/DC was enjoying the success of being the world's biggest rock band. Following two blockbuster albums with singer Brian Johnson (Back In Black and For Those About To Rock We Salute You) and massive sold-out world tours, the members of AC/DC (Angus and Malcolm Young on guitar, Cliff Williams on bass and Phil Rudd on drums) were generally tired of the pomp and circumstance that came with it all. After all, this was the rough-and-tumble bar band from Australia who only a few years ago were fighting to win over club crowds. So the band decided to strip away all of the excesses and get back to basics. No more major producers (the band produced themselves for the first time), no more slick management deals and a simple sketch for an album cover made Flick Of The Switch an old-fashioned stripped-down rock album—the kind they make best.

Certified Platinum in the US! Features the classics Flick Of The Switch, Nervous Shakedown and Guns For Hire.

Merited for its song variety, artistic expression and sonic clarity, Powerage is favored by many aficionados to be AC/DC's most accomplished performance in a studio setting. Recorded in Australia circa 1978, Powerage also ushered in a new era of sorts, for it marked the debut of London, England bassist Cliff Williams, whose driving, eighth-note bottom brought AC/DC's attack to full caliber. The final album to be recorded with production team Vanda & Young during the Bon Scott era, Powerage was their most focused work to date and really showcases Angus Young's fiery guitar playing.

Sick and tired of the pop and pop-metal that was being heralded by MTV in 1988, AC/DC released the aptly titled Blow Up Your Video, a major reaction to the slick, image-intensive bands that the music television format had spawned. While other bands who had always cited AC/DC as an influence (many of whom opened for the band on their way up) became increasingly popular, the trappings of rock stardom began to creep into the genre, rendering many so-called hair bands ridiculous clones of one another. This was diametrically opposed to AC/DC's stripped-down rock credo—something the band had stuck to since their early days. So, what to do if the genre you helped create turns on you? You stick to your guns, crank up the volume, and simply blow them all away.

Certified Platinum in the US! Features the classics Heatseeker and That's The Way I Wanna Rock N Roll.

AC/DC's success in the early 1980's proved to be a double-edged sword. The mere fact that Back In Black became one of the biggest selling albums of all time put heavy pressure on the band to deliver big hits, and it also made hard rock a sought-after commodity. Therefore, record labels were now looking to to lead the way while signing second and third rate knock-offs, which only served to cannibalize the band's loyal fan base. Hard rock had become a pop music and fashion trend! But if one thing holds true about AC/DC, it's that trends be damned. They have always made exactly the music they have wanted, and that's exactly what Fly On The Wall represents. 1985, 1995, 1975—it doesn't matter. This is and this is timeless.

Certified Platinum in the US! Features the classics Fly On The Wall, Shake Your Foundations and Sink The Pink.

PLUS THIS RARE OUT OF PRINT SIMPLY VINYL UK PRESSING - AC/DC THE TREMENDOUSLY RARE & VALUABLE OUT OF PRINT UK SIMPLY VINYL PRESSING HIGHWAY TO HELL WITH THE GOLD MARKETING STICKER 180 GRAM PRESSING WITH THE BEST PROTECTIVE PACKAGING EVER PLACE ON AC/DC TITLES. THIS TITLE IS ANOTHER ANCHOR TITLE OF THIS COLLECTION. THIS PRESSING SELLS FOR WELL OVER $200 IN THE OUT OF PRINT COLLECTORS MARKET.

AC/DC Highway To Hell 180 GRAM SIMPLY VINYL UK PRESSED OUT OF PRINT FOR OVER A DECADE RARE LP THESE Simply Vinyl UK products have the best collectors DELUXE heavy duty protective packaging of the product in the business. This deluxe REUSABLE packaging allows the owner a tremendous way to store that item once opened so it stays in pristine condition for the life of the product.

No other company ever put this much cost into there packaging for collectors.

Collectors Alert: Many of these Simply Vinyl Titles will never be available again. Their license to produce these 180 Gram Masterpieces with Universal Records International has Ended. This means that this specific title is now out of print forever and there are very few remaining is sealed condition. This title is going to skyrocket in value & price over the next few months. So Don't Miss Out on being one of the last people to own this outstanding pressing.

PLUS FOR THE COLLECTOR WE ARE ADDING THE 2003 AC/DC Highway To Hell 180 GRAM LP Remastered from the original mix-down 2-track masters for unprecedented sonic brilliance AS YOUR PLAYER OR A COMPARISON TO THE SIMPLY VINYL UK PRESSING.

.
The first of three collaborations between AC/DC and producer Mutt Lange resulted in the band's first big hit in the US. Burning with songs about the classics: sex, drugs and rock 'n' roll, AC/DC was never more clear in their mission statement than on the title track. The album, and subsequent world tour (captured on film in the movie Let There Be Rock) would prove to be a tragically bittersweet victory, with the untimely death of charismatic singer Bon Scott just 6 months after its release.

Certified 6x Platinum in the US! Features the classics Girls Got Rhythm, Touch Too Much and Highway To Hell.

"Upon being promoted from the band's driver to its lead singer, Bon Scott immediately came up with his singular formula for recording vocals: He downed half a bottle of bourbon, chased it with some weed and a fat rail of blow, and proclaimed, "I'm ready." Then he got the take. Scott was a force of nature, and by AC/DC's fourth studio album, he and guitarist Angus Young had become an explosive one-two punch. "You'd need several volumes of Britannica," Young noted, "just to chronicle what Bon got up to in one day." Inevitably, Scott's wicked ways caught up with him, and he was dead six months after Highway's release." -

"'I’ve been on the road for 13 years,' AC/DC singer Scott said in 1978. 'Planes, hotels, groupies, booze... they all scrape something from you.' Pumped up by producer 'Mutt' Lange, 'Highway' is the last will and testament of Scott: When he yells, 'Don’t stop me,' right before Angus Young’s guitar solo, it’s clear that no one could – he drank himself to death in 1980." - Rolling Stone

International Buyers – Please Note:
Import duties, taxes, and charges are not included in the item price or shipping cost. These charges are the buyer's responsibility. Please check with your country's customs office to determine what these additional costs will be prior to bidding or buying. Note: It's illegal to falsify customs declarations or mark an item as a "GIFT" or mark item at a LESSER VALUE in order to avoid customs fees