IN THE MORNING Hosanna 1974 Rural Rock LP Vinyl SEALED Psych Pakora Half Off! 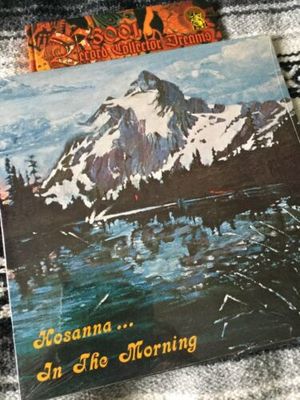 ONLY A COUPLE COPIES LEFT!!!

Sold by surviving member, songwriter and lead guitarist of Hosanna !!!

Magnificent rural rock gem, a super scarce custom production from six Wisconsin fellas. A good number of the tracks are moody pastoral acoustic ballads, gentle sincere heartfelt vocals adrift in fragile stirring melodies. A touch of Allman Brothers on the spirited country-rockin’ ‘Put Your Trust’. In the more psych-edged direction are the dreamy mysterious ‘Friend’ and the heavier fuzz-blasting ‘What Lasts’, either of which would be right at home on the Rainbow Promise lp. Noteworthy lead guitar work throughout, both electric and acoustic. Not an especially loud album (except for the one aforementioned cut), but most definitely has that sought-after “edge” that characterizes the better rural-rock privates. Sharp cover art, a painting of a lake and snow-covered mountain.

Rarest of the rare!

Please see my other auctions ...