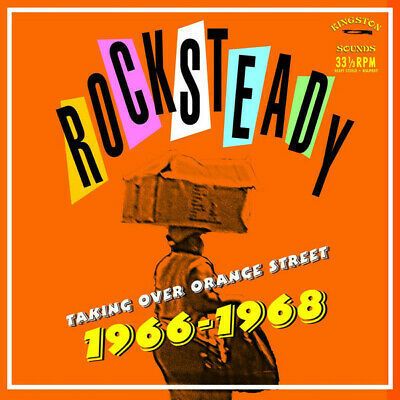 Rocksteady took Over Orange Street, Jamaica around 1966, the same
time that an extreme heatwave hit the Jamaican island. Some say the
previous jerky Ska Rhythms proved too strenuous of an activity to
partake in, during the all night Sound System sessions .So it proved a
winning formula to slow the beat down to a more leisurely pace.
Whatever the reasons were this two year period that ran until 1968,
would see some of the power escape from the big three producers,
Clement ‘Coxone’ Dodd, Prince Buster and Duke Reid, who up until this
period had ruled the airwaves .It was time to make room for a new wave
of up and coming producers that also had something to offer the people.
Such names as Joel Gibson ( Joe Gibbs ), Sonia Pottinger, Derrick
Harriott and most prolific of them all Mr Bunny Lee. These new names
would unleash some fine music in what would be a short lived chapter in
the ever changing and moving beat that is reggae’s history. We have
compiled some of the biggest hits from the Rocksteady period, alongside
some lesser known cuts we believe deserve to be re-evaluated.
Rocksteady was an inspirational and somewhat over looked sound that
provided us with some outstanding music. So sit back and enjoy some
Rocksteady straight from the dances of Jamaica.

Hope You enjoy the set….