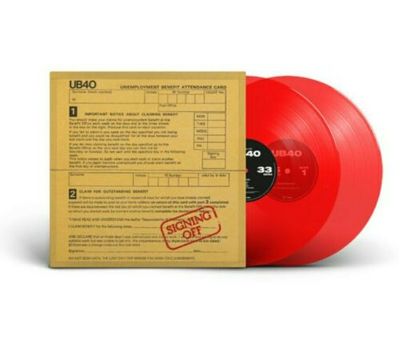 
UB40 "Signing Off" Double 🔴🔴Red Vinyl album . New sealed. Condition is "New".😁😁😁 pictures of contents are of my own personal copy. The item is sealed and unplayed.


40 years after its landmark release in 1980, the vinyl reissue of UK pop/reggae band UB40 debut album Signing Off, will be released on March 14, 2021 via UMC. An instant critical success, Signing Off debuted at #2 on the UK album charts and was later certified Platinum by the BPI, with singles “Food For Thought” and “I Think it’s Going To Rain Today” reaching the top ten of the UK singles charts. The 2LP (180g) red vinyl features all 10 original tracks, as well as three bonus tracks (“Madam Medusa”, “Strange Fruit,” and “Reefer Madness”.

The cover artwork memorably duplicated the UK’s equivalent of an unemployment benefit card (a “UB40”), with the title Signing Off rubber-stamped in red, but it was the music that quickly worked its way into the musical collections of a young, mainly student crowd with its knowing lyrics, upbeat reggae rhythms and dubby, instrumental passages, offset by warm horn solos and Jamaican style scatting. An impactful debut, Signing Off signalled the entry of a formidable voice in British New Wave. NME called the album "A courageous debut... Their radical sentiments and trenchant lyrics are given all the more force by the soft-fist of UB40's measured musical delivery... The music might be mellow, but the hard-backed sentiments are hardly those of the nice reggae band you may have pigeonholed the UBs as,” later placing it at #13 on their Albums Of The Year list. AllMusic said that “Their rhythms may have been reggae-based, their music Jamaican-inspired, but UB40 had such an original take on the genre that all comparisons were moot... Their music was... revolutionary, their sound unlike anything else.” BBC Music stated that “Signing Off is still believed by many to be the group's greatest album, and it remains the clearest window into what the band were all about... [it] has energy and intelligence that made it stand out from so much post-punk pop.” Q Magazine would also rank Signing Off at #83 on their “100 Greatest British Albums” list.